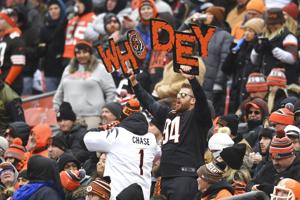 If you’re a Bengals fan who lives outside of the Tri-State, though, Cincinnati chili can be hard to come by.

That’s why one Reddit user is sending chili packets to fans worldwide through a fundraiser he’s calling “Operation Cincy Chili.”

Jonathan Feng is using the Bengals subreddit page to send packets of Cincinnati chili spices to fans who have a hard time getting the supplies.

Fans can also donate to Feng’s GoFundMe page so that there is enough chili to go around.

Feng says that even though his dad and grandparents are from Cincinnati, he grew up in Taiwan and has experienced this shortage first-hand.

“For me, it was waking up early at 6 a.m. to watch games,” said Feng. ” I’m sure a lot of fans are like that; no matter what time, they will wake up and watch the game.”

He says that the idea for the fundraiser came while frequenting the social media platform, Reddit.

“Being on Reddit, you meet a lot of people like my situation, being overseas or not in Ohio,” said Feng. “I wanted to find a way to send them a packet to enjoy.”

The goal of Feng’s fundraiser is $1,000, and he will find a way to bring chili to fans no matter where they live.

Anything left over will be donated to the Joe Burrow Hunger Relief Fund.