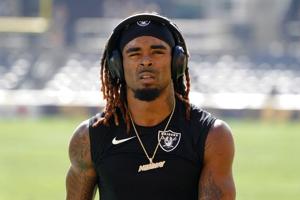 LAS VEGAS (AP) — NFL cornerback Damon Arnette was arrested in Las Vegas on suspicion of weapons and drug offenses, prompting him to be released by his latest team, the Kansas City Chiefs.

Arnette, 25, was booked Saturday on suspicion of crimes that included assault with a deadly weapon and carrying a concealed weapon without a permit, according to jail records.

Police Lt. Justin Byers said the arrests of Arnette and another man stemmed from a report of a person with a gun Friday at 5:45 p.m. at a Las Vegas Strip hotel-casino, the Las Vegas Review-Journal reported.

Arnette was jailed pending a Sunday court appearance, and it wasn’t immediately known if he had an attorney who could speak on his behalf.

The Chiefs had signed Arnette to a reserve/future contract on Jan. 20.

Arnette was released by the Las Vegas Raiders in November after a social media video appeared to show the 2020 first-round pick threatening someone’s life while brandishing multiple guns.