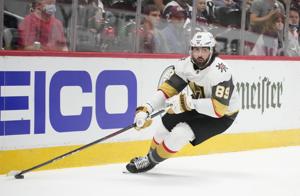 Golden Knights hoping to head into the All-Star break with a win, while Tuch, Krebs return to T-Mobile Arena | Las Vegas Sports

LAS VEGAS (FOX5) — The Golden Knights are back at T-Mobile Arena for the first time in nearly two weeks, looking to pocket another pair of points against the Buffalo Sabres prior to the All-Star break. Vegas is coming off maybe their most difficult road trip in franchise history, where they played four of the top six teams in the Eastern Conference, coming away with five of a possible eight points and a 2-1-1 record.

“We’re coming off a road trip where we’ve played four of the best teams in the league and human nature is probably to take your foot off the gas a little bit when you look at the standings, but that would be a huge mistake for us,” explained Golden Knights head coach, Pete DeBoer. “The message for us is these two points are as important as the Tampa two points in the standings and we want to go into this break feeling good about ourselves and making sure that work we put in the last ten days on that trip we were on was worthwhile.”

Heading into Tuesday night’s games, the Golden Knights sit in first place in the Pacific Division. Though the Calgary Flames and the Edmonton Oilers sit seven and eight points back respectively, with five and four games in hand, respectively.

When the Golden Knights hos tthe Sabres, it will be the return of Alex Tuch and Peyton Krebs, two players who were members of the organization to start the season, but were jettisoned to Buffalo as part of the Jack Eichel trade. Tuch and Krebs are two of five former Golden Knights on the Sabres roster.

“It will be fun,” smiled Golden Knights defenseman, Brayden McNabb. “Never played against (Tuch) before. He’s one of those guys that’s really hard to play against. He’s big, he’s fast, he’s got good hands. I know he’ll be super excited to be back. Not just him, but (Peyton Krebs), and (Cody) Eakin too. It will be fun to see those guys on the other side.”

“First off, two quality people in Krebs and Tuch,”explained DeBoer. “Enjoyed my time with both those guys, little longer with Tuchy than Krebs. It was great to see Krebsy score his first two goals the other night, they were legitimate NHL goals and I’m sure that they’re the first of many to come. Tuchy is going to have the rockets on his skates (tonight) I’m sure. He’s excited to play on an ordinary day, I’m sure his energy is going to be through the roof (tonight). I really enjoyed working with both those guys and happy to see they’re both contributing in a big way for Buffalo.”

Tuch has 12 points in 12 games so far this season with Buffalo, while Krebs has five points in ten games as a member of the Sabres.