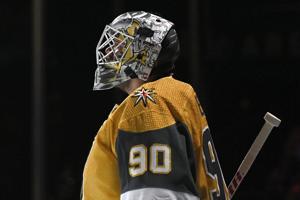 LAS VEGAS (AP) — Mark Stone, Jonathan Marchessault and Brett Howden each had a goal and an assist and the Vegas Golden Knights defeated the Buffalo Sabres 5-2 on Tuesday night.

With the win, the Golden Knights closed the first half of the season on a 4-1-1 run and head into the All-Star break in sole possession of first place in the Pacific Division with 57 points, two ahead of Anaheim.

“We challenged our whole team to try and find another level … to make sure we went into the break in a good place, and I think everybody did that,” Vegas coach Peter DeBoer said.

Reilly Smith and Keegan Kolesar also scored for the Golden Knights. Robin Lehner made 30 saves and won for the fourth time in five starts.

“Our game plan was to use our rush and our speed and put them on their heels,” Smith said. “I feel like Buffalo played a pretty wide open game, it enabled us to get a lot of odd-man rushes.”

Alex Tuch, who was traded from Vegas to Buffalo on Nov. 4, and John Hayden scored for the Sabres. Craig Anderson, who stopped 29 shots, remains one win shy of the 297th of his career, which would pass Ron Hextall for 40th all-time in NHL history.

Along with Tuch, former Golden Knights Peyton Krebs and Cody Eakin also returned for the first time. The trio started for the Sabres. They were greeted by a tribute video in the first period.

“That was pretty special,” Tuch said. “Kind of rolled right into that tribute there and it was nice. It was tough, but very fortunate and it was very nice that they did that.”

The Golden Knights wasted no time in spoiling their return, however, as they transitioned into their own zone with relative ease, and a perfectly executed tic-tac-toe pass attack ended with Smith tapping home the game-opening goal just 33 seconds into the contest and ending a personal 10-game goal drought for Smith.

“No one deserves one more than him and no one wears it harder than him when he’s not chipping them in,” DeBoer said. “Typical Reilly Smith goal. Middle-lane drive, stop at the net, and get things to happen. He deserved one. He could have had two the other night in Tampa. He’s always been a streaky guy, so hopefully this starts another streak.”

Speaking of streaks, Howden extended his point streak to four games by making it 2-0 late in the first period when he gathered the loose puck, skated across the slot and scored his third goal in his last three games. Howden has three goals and three assists in his last four games.

“He’s playing with more confidence, his head is up as soon as he gets his first touch on the puck and he’s driving the net hard,” Smith said of Howden.

Marchessault made it 3-0 with a power-play goal when he caught Anderson out of position and whipped home his 20th of the season. Shortly after, it was Kolesar grabbing a pass from behind the net delivered by Howden and punching it in to extend the lead to 4-0.

Tuch ruined Lehner’s shutout bid late in the second when his snap shot from the right circle found the back of the net. Since making his debut with the Sabres on Dec. 29, Tuch has 13 points (five goals, eight assists) in 13 games, including eight points (four goals, four assists) in his last six contests.

Vegas struck early in a period for a third time, when Max Pacioretty took the puck behind the Buffalo net and fed Stone in front, who scored his eighth.

Hayden’s goal late in the third closed out the scoring.

NOTES: Also now with Buffalo are former Knights Colin Miller and Malcolm Subban, who are on injured reserve. … Buffalo LW Rasmus Asplund played in his 100th career game. … Vegas earned its 200th win as a franchise in its 337th game. The Golden Knights are the fastest team in NHL history to 200 wins, breaking the Ottawa Senators record of 200 wins in their first 349 games.

Buffalo: Hosts Columbus on Feb. 10 after the All-Star break.