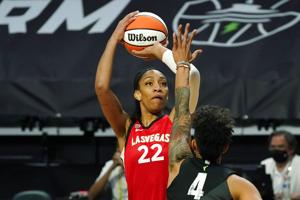 LAS VEGAS (AP) — The Las Vegas Aces have re-signed A’ja Wilson, locking up the 2020 WNBA MVP at the start of free agency.

Terms of the deal announced Wednesday were not disclosed.

Teams could not start talking to free agents until Saturday, but the Aces moved quickly to keep Wilson in the desert.

“A’ja is a generational talent both on and off the court, and I’m excited to have her back in the fold with the Aces,” new Aces coach Becky Hammon said in a statement. “She has been the leader of this team, and an integral part of the Las Vegas community since the day she was drafted, and I know our fans are ecstatic to once again have her at the forefront of our pursuit of a WNBA Championship.”

Wilson was the first overall pick in the 2018 WNBA draft after leading South Carolina to an NCAA championship the year before and has become one of the league’s best players in four seasons.

Wilson won the 2020 MVP after averaging 20.5 points, 8.5 rebounds and 2.0 blocked shots per game while leading the Aces to the WNBA Finals. The 6-foot-4 forward has earned two all-WNBA nods, three All-Star appearances, WNBA rookie of the year and won a gold medal at the Tokyo Olympics.

Wilson has career averages of 19 points and 8.1 rebounds per game.