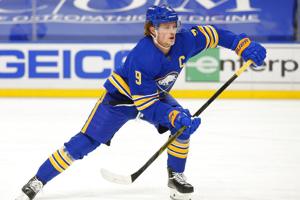 LAS VEGAS (FOX5) — NHL All-Star media day provided the leagues best players to showcase some of their personality, as well as give visiting media access to players and coaches they otherwise wouldn’t be able to conversate with. Pete DeBoer was a popular guy in particular to the Buffalo media, who started off asking about the progress of superstar center, Jack Eichel.

“There is a couple [practices] in the last week where maybe he was the best player on the ice,” DeBoer said with a smile. “I would say he is progressing pretty well. We haven’t started contact yet, I think that is the next step and that’s a big step obviously. Everything changes when we get into full contact, but from a sheer practice and skill point of view, he’s elite-elite, and everyday we’re out with him, the group gets more excited.”

For the last few weeks Eichel has been accompanying the team on road trips, skating with the group in a red (sometimes light blue) non-contact sweater. According to DeBoer on Friday, Eichel may be getting a regular jersey sooner rather than later.

“The doctor was adamant that three months out of surgery there would be absolutely no contact, and I believe that is this week. I think coming out of this break, that will be on the table starting the contact.”

Eichel was drafted second overall by the Sabres in the 2015 NHL Draft, spending his first six seasons in Buffalo before being traded to Vegas in October of 2021.

“I think he can just come in and do his thing, he doesn’t have the pressure of having to carry a team. I talked to him the other day, he hasn’t played in an NHL playoff game yet and I know that’s exciting for him and that’s a whole new level of hockey when you get to that time of year. I’m excited for him because I think he is going to excel in that type of game, and I know he’s excited about the opportunity to play playoff hockey.”

The Golden Knights are off until Monday where they will practice at City National Arena, before heading to Alberta, Canada where they will face the Edmonton Oilers on Tuesday, followed by the Calgary Flames on Wednesday.