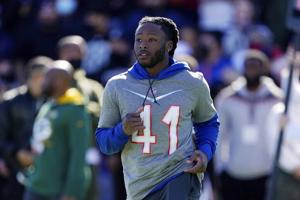 LAS VEGAS (FOX5) — An NFL player was arrested this weekend after Las Vegas Metropolitan Police say he was involved in a battery-related incident at a Strip nightclub.

About 5:50 p.m. on Feb. 5, police were called to an area hospital following an incident at a club in the 3500 block of South Las Vegas Boulevard. A victim told police they had been battered by 26-year-old Alvin Kamara, a running back for the New Orleans Saints.

On Sunday, Kamara was booked at the Clark County Detention Center on a charge of battery resulting in substantial bodily harm. Additional details regarding Kamara’s relationship with the victim were unavailable.

According to jail records, Kamara’s initial court appearance was set for Feb. 7 at 1:30 p.m.

The player is visiting Las Vegas for the 2022 Pro Bowl.

This is an ongoing investigation. Anyone with information about the case is asked to contact authorities by phone at 702-828-3204. To remain anonymous, contact Crime Stoppers at 702-385-5555 or www.crimestoppers.com.