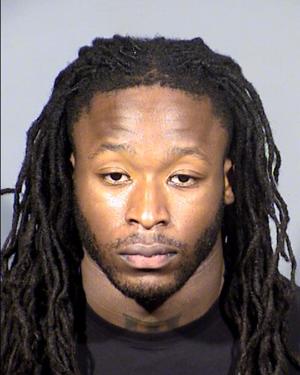 LAS VEGAS (AP) — Police learned Saturday that New Orleans Saints running back Alvin Kamara was a suspect in a pre-dawn beating of a man at a Las Vegas nightclub, but did not arrest Kamara until after Sunday’s NFL Pro Bowl, a Las Vegas Metropolitan Police Department spokesman acknowledged Monday.

The alleged victim in the attack was treated for facial injuries at a Las Vegas hospital, where he told patrol officers that the incident occurred about 10 hours earlier, according to a police department statement.

“There was a delay in reporting due to the victim receiving treatment,” the statement said.

The name of the victim, his hometown and a motive for the alleged attack won’t be made public immediately, Officer Larry Hadfield said.

Kamara, one of the top running backs in the NFL, is charged with felony battery resulting in substantial bodily harm.

Detectives went to the Cromwell hotel-casino, home to the rooftop Drai’s After Hours club on the Las Vegas Strip, to identify Kamara, but did not immediately contact him, Hadfield said.

“It was known that (Kamara) would be participating in the Pro Bowl,” the department statement said.

Kamara was interviewed and arrested at Allegiant Stadium after Sunday’s game, which started at noon local time, and taken to the Clark County Detention Center.

Court and jail records showed Monday he posted bond and was released with a March 8 court date.

Records did not immediately identify Kamara’s attorney. A conviction on the felony charge could result in a sentence of one to five years in state prison.

According to his arrest report, the victim told police the incident happened at Drai’s inside the Cromwell casino on the Las Vegas Strip.

According to the victim, he was leaving the club and was making his way to the elevators. There, he said Kamara was waiting with a group, and put his hand on his chest to stop him from walking into the elevator.

The victim pushed Kamara’s hand off, then was pushed by someone in the group, causing himself to stumble back.

After he fell, he said he was hit and kicked by multiple people until he lost consciousness. The victim had an orbital fracture on his right eye that may require surgery, police said. It was so swollen, it couldn’t open during the police interview. Police also noted injuries to his head, knee and arms.

Police said surveillance footage from Cromwell backed up the victim’s story, and that Kamara was one of four people involved.

The video reportedly showed Kamara punch the victim multiple times, then once the victim falls back, Kamara punches him three more times. Three others join in, “stomping” the victim in the face, chest and legs.

Kamara and his party were escorted out by security, police said.

In custody, Kamara told police he remembered the victim “calling one of his friends ugly,” the report said, then later said, “I’ll whoop your a–, too.”

He told police he saw a fight break out and the victim get punched, but didn’t remember if he punched the victim while on the ground, which didn’t match the surveillance footage.

Kamara further told police he thought the victim was running away and had done something to his group, so he chased and punched him several times.

The Saints and Kamara’s agent didn’t respond to messages about the charge.

Kamara had four catches for 23 yards for the NFC in the Pro Bowl, which the AFC won, 41-35. This season for the Saints, he had 1,337 yards from scrimmage and nine touchdowns on the way to being picked for his fifth Pro Bowl in five seasons.