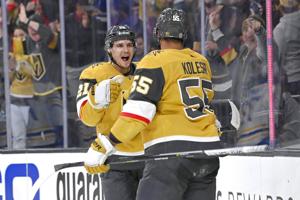 LAS VEGAS (FOX5) — The Golden Knights won their third straight on Tuesday night, shutting out the Oilers 4-0, creating a four-point cushion atop the Pacific Division standings.

At the beginning of the game, the story was how Vegas rostered their healthiest lineup of forwards since the first week of the NHL season, but at the end of the night, the spotlight was once again fixated on the teams depth.

Backup goaltender Laurent Broissoit, was given the start in the first game of a back-to-back, turning away all 28 shots he faced and blanking the team who he made his first NHL start with nearly seven years ago. Netting the first goal of the game and the eventual game-winner in Edmonton was Brett Howden, the fourth-liner scored in his fourth-straight game, giving him eight on the season, one shy of his career-high. The 23-year-old has now recorded a point in seven of his last eight road games.

“He’s hot let me tell ya, he’s on fire,” smiled Golden Knights defenseman, Alex Pietrangelo. “He was hurt there, I think he was out of the lineup and then he comes back and playing at the level he is playing at is really impressive. He’s winning draws when we need him to, he’s playing defensive minutes, taking some of the pressure off our top line. He has really found his stride here playing well with us, certainly Pete trusts him in different situations so that speaks volumes to how he’s playing.”

“We’re built around our depth,” explained Golden Knights head coach Pete DeBoer. “It was great for Howie to get another one and our fourth line. Big one too, the first goal of the game is always important on the road. I think it’s different people every night, I think that’s how good teams win.”

The Golden Knights scored the first goal of the game for the fourth straight time. Vegas is 21-8-1 this season when lighting the lamp first, meaning when the VGK go up 1-0, they have a 70% chance of taking home two points.

“I think when we’re doing it, we’re staying aggressive,” explained Pietrangelo. “We go up by one or two, there have been a lot of games this year where it seems like we take our foot off the gas at the start of periods, but felt like tonight we got up by a couple and we just kind of kept that going. That goal at the start of the third was a big one, we wanted to go up by four. I feel like when we’re on our toes and we continue to push the game the way we want or controlling or playing at our pace it’s tough for teams to come back on us.”

“This is a really tough game to chase the game in and I think we have good structure, I think we play well defensively. We’ve got good goaltending,” said DeBoer. “If we can get out in front of you and take that pressure off having to get a goal or climb back in the game, it’s a lot easier place to play. I think not just for us, but everyone in this league.”

“We still want the next goal, we don’t sit back and give the other team momentum,” said Brossoit.”We have a lot of guys that have very little ego and will flip pucks out and put pucks off the glass and also make plays and play in the other end which I think is the most frustrating thing to do.”

The Golden Knights did not have a morning skate on Wednesday. Puck drop with the Calgary Flames is set for 6:30 p.m. After the game, Vegas will head home and won’t play again until Wednesday, Feb. 16 when they host the Colorado Avalanche at T-Mobile Arena.