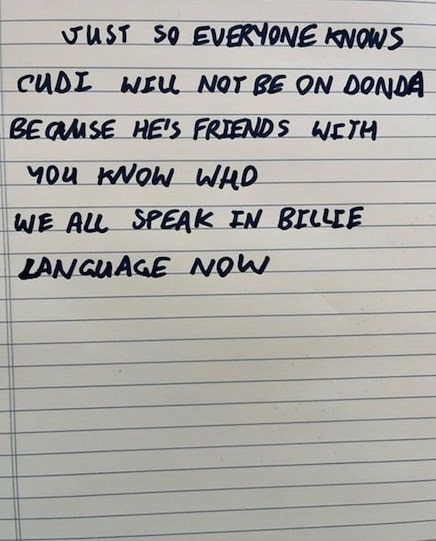 The Source |Kanye Says he is done working with Kid Cudi, Cudi responds

It’s been quite a drama-filled week for Kanye West. In addition to a myriad of issues with his soon-to-be-ex-wife Kim Kardashian, Ye has been beefing with a number of other high-profile artists including Billie Eilish and now former friend Kid Cudi appears to be his latest enemy.

The beef began when Ye posted a picture of a handwritten note on Instagram. The all-caps block lettering read: “Just so everyone knows Cudi will not be on Donda because he’s friends with you know who. We all speak in Billie language now.”

The ‘Billie’ reference was to Billie Eilish, who Ye believes slighted Travis Scott by announcing that she paused her show to help an audience member in distress. The ‘you know who’ reference was apparently directed towards Pete Davidson. Davidson and Kid Cudi have been friends for several years.

In response, Kudi posted the following comment on Ye’s IG post: “Too bad I don’t wanna be on ur album u f***** dinosaur hahaha. [laughing emoji] everyone knows ive been the best thing about ur albums since i met u. Ima pray for you brother.” The statement was followed by a hand holding the peace sign emoji.

If that wasn’t enough, Cudi made note of the issue on Twitter, tweeting: “We talked weeks ago about this. You’re whack for flipping the script and posting this lie just for a look on the internet. You ain’t no friend. BYE.”

West is busy promoting his upcoming album, Donda 2, and appears to have recently held a private release party in LA earlier this week.

The Source |[WATCH] Kodak Black Shot In The Leg At Justin Bieber Super Bowl Party, Three Others Injured By Gunfire