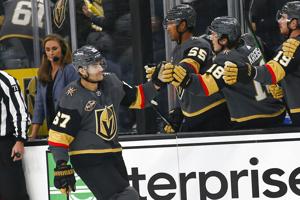 LAS VEGAS (FOX5) — The Vegas Golden Knights announced a brand-new “Five-Game Stretch Run Plan,” which includes five of the team’s home games during the remainder of the regular season at T-Mobile Arena, featuring big opponents from both the Eastern and Western Conference, including former VGK goaltender Marc-Andre Fleury and the Chicago Blackhawks.

The following are the five games on the plan:

The plan is available for purchase now through the team’s website. Ticket plans start at $355 per seat, and include an exclusive hat recognizing the team’s fifth season. In addition, fans can join the “Can’t Wait List,” which includes exclusive benefits and events, including priority access to future ticket plans and presale opportunities during the postseason.