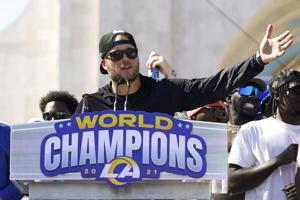 An NFL photographer who fell Wednesday from a stage at the Rams’ Super Bowl rally in Los Angeles has a fractured spine, according to a GoFundMe page raising money for her bills.

Kelly Smiley’s fall at the Super Bowl champions’ victory celebration was caught on video and some people have criticized quarterback Matthew Stafford for his response.

Smiley fell as she tried to photograph Stafford and his wife. The Rams’ quarterback turned and walked away while Kelly Stafford went over to check on Smiley.

Smiley wrote on Instagram she was “Feeling ok” and added, “Thank you everyone for reaching out.” She has not responded to CNN’s request for comment.

The Rams said they were sorry for what happened and they and the Staffords would take care of Smiley’s expenses from the fall.

“As we told Kelly, we will be covering all her hospital bills and replacing her cameras,” a team spokesperson told CNN. “We wish her a speedy recovery.”

A GoFundMe page has been set up on Smiley’s behalf with a goal of $30K. According to organizer Tim Kothlow, “Kelly took a heavy fall off the stage while covering the event, and it landed her in the hospital with a fractured spine.”

CNN has reached out to the NFL for comment.