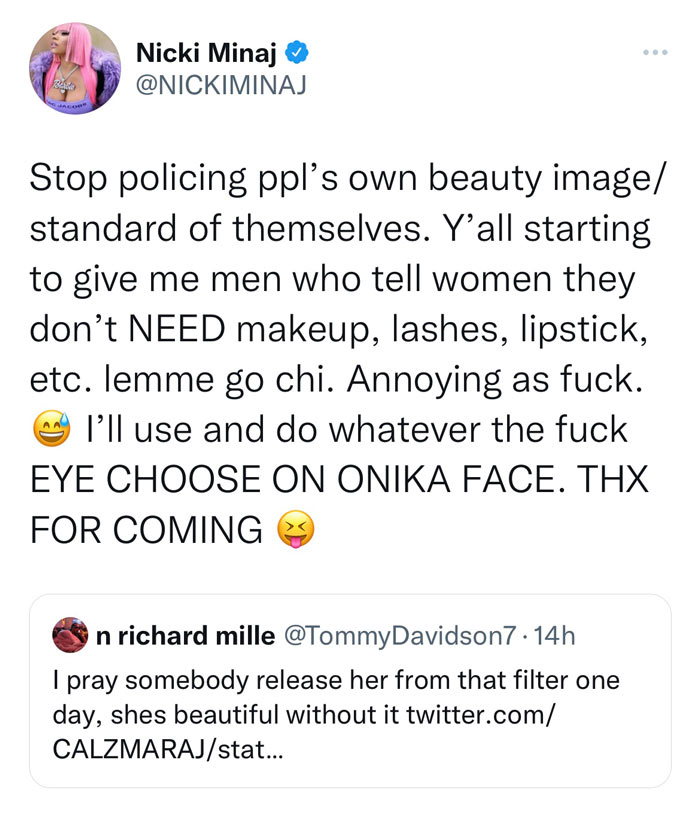 Nicki Minaj has a problem with men who feel the need to question women’s beauty standards.

The “Do We Have a Problem?” rapper clapped back after one of her male followers reposted a couple of her selfies and suggested that she stop using a filter on her face.

“I pray somebody release her from that filter one day, shes beautiful without it,” the person commented.

Nicki responded by saying that men have no place telling women how to dress or do their makeup.

“Stop policing ppl’s own beauty image/standard of themselves,” she wrote in a since-deleted tweet. “Y’all starting to give me men who tell women they don’t NEED makeup, lashes, lipstick, etc. lemme go chi. Annoying as f**k. 😅 I’ll use and do whatever the f**k EYE CHOOSE ON ONIKA FACE. THX FOR COMING.”

In a later tweet, she also put men in check for thinking that women are only interested in impressing the opposite sex.

“Dear Men, Women don’t dress for you, do makeup for you, do their hair for you,” she wrote. “Just like most of y’all only phuck for YOU & not the woman’s pleasure.”

DO MAKEUP FOR YOU ✅

DO THEIR HAIR FOR YOU ✅

Just like most of y’all only phuck for YOU & not the woman’s pleasure.

THIS ALL FOR US.

This ain’t ABOUT YOU

Nicki continued to speak up for her fellow females with an empowering message. “THIS ALL FOR US,” she added. “This ain’t ABOUT YOU. Now GO. Thx for COMING.”

While the rap queen uses her powerful platform, she is also conquering the charts. Her single “Do We Have a Problem?” with Lil Baby debuted at No. 2 on the Billboard Hot 100 this week, earning her 20th Hot 100 top 10.