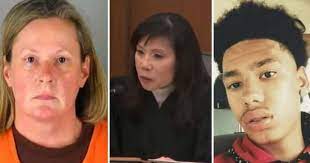 The Asian American judge Regina Chu who sentenced former officer Kim Potter to two years in prison for killing Daunte Wright choked up as she described the difficulty deciding on a sentence for Potter. Chu cited the difficult job that police face — and Potter’s remorse — as justification for giving her a light sentence despite the state’s recommendation of between six to eight years.

Potter, who said she meant to use her Taser but mistakenly fired her handgun into Wright’s chest as he tried to drive away from a traffic stop in April.

Wright’s family and attorneys angrily condemned Chu for going well below prosecutors’ recommendations. They pointed out that a Black former officer convicted of shooting a white woman in 2017 in a different Minnesota case got no such mercy despite his expressions of remorse.

Katie Wright, who is white, told reporters that Potter “murdered my son,” and that, with this sentence, “the justice system murdered him all over again.” She accused Chu of being taken in by a performance that was coached, and wondered why her own tears didn’t get such a sympathetic response.

“This is the problem with our justice system today,” Wright said. “White women tears trump — trump — justice. And I thought my white woman tears would be good enough because they’re true and genuine.”

The phrase “white woman tears” has gained national attention on race, suggesting that white people weaponize their emotions against people of color to protect their privileged positions.

Potter cried in testimony at her trial in December and sobbed again Friday as she directly addressed Wright’s family in the courtroom.

“Katie, I understand a mother’s love and I am sorry I broke your heart,” Potter said. “My heart is broken for all of you.”

Wright’s family had called for the maximum possible sentence. The state attorney general’s office originally laid out a case for a stiffer-than-normal sentence, then argued Friday for the presumptive sentence of just over seven years recommended by state guidelines.

But Chu said Potter’s conduct over an otherwise exemplary 26-year career “cries out” for a shorter sentence.
Welcome to ameriKKKa!