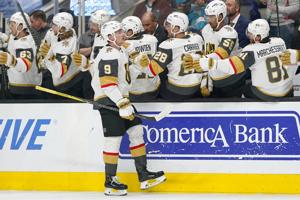 Eichel’s goal came in his third game back from artificial disk replacement surgery on his neck in November as he finished off a nifty give-and-go with Chandler Stephenson. It was his first goal since Jan. 28, 2021, with Buffalo.

“It’s obviously been a long time since I scored a goal, so it’s a good feeling,” Eichel said. “It’s just part of my game. Obviously, I want to try to chip in offensively, so it’s good to help contribute tonight.”

Vegas acquired Eichel in a deal with the Sabres on Nov. 4 and he underwent the surgery the following week. He began practicing with the Golden Knights last month and made his debut last Wednesday as a top-line center.

He has a goal and two assists in three games.

“I’m not surprised because he’s a special player,” coach Peter DeBoer said. “If he wasn’t such a special player, I think it probably would have taken longer. But he’s got such exceptional skill that I think it allows him to get back up to pace quicker.”

Keegan Kolesar and Max Pacioretty also scored, and Stephenson added an empty-netter as the Golden Knights maintained their dominance of what once was a fierce rivalry. Eichel assisted on Pacioretty’s goal early in the second.

“We know he’s capable of doing offensively,” defenseman Alex Pietrangelo said. “Jack’s one of those players that when you watch him and he plays, he makes the people around him better. That’s a big compliment.”

Vegas won all eight meetings against San Jose last season and hasn’t lost to the Sharks since Nov. 21, 2019, at home. The Golden Knights also haven’t lost in San Jose since blowing a three-goal lead in the third period of Game 7 in the first round of the 2019 playoffs.

Nick Bonino scored the lone goal for the Sharks, who are winless in their last six games. James Reimer made 31 saves.

“There’s a bunch of season left, but not a ton,” Bonino said. “Lose these games and you run out of time.”

Reimer stopped Eichel on a breakaway early in the first and the Sharks killed a double-minor against Rudolfs Balcers before Kolesar opened the scoring with a shot from the top circle on the rush midway through the first period.

Thompson had earlier made big stops against Matt Nieto and Noah Gregor.

“We’re getting scored on first and then they’re getting the second one,” Sharks captain Logan Couture said. “That’s the main thing when you give a team a two-goal lead early in games. In this league, I know comebacks happen, but teams are very good at protecting the lead, especially a team like Vegas that’s elite and they know how to play defense.”

The Sharks fell behind 2-0 after the first period for the third straight game since returning from a nearly two-week break.

San Jose managed to rally to force overtime on Thursday against Vancouver to earn a point, but couldn’t overcome the early deficits against Edmonton or Vegas.

The Sharks have been outscored by 14 goals in the first period on the season.