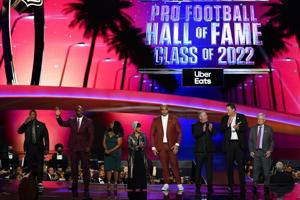 CANTON, Ohio (AP) — The Las Vegas Raiders and Jacksonville Jaguars will open the 2022 NFL preseason schedule on Aug. 4 in the Hall of Fame game.

Former Raiders receiver Cliff Branch and defensive lineman Richard Seymour will be inducted into the Pro Football Hall of Fame on Aug. 6, as will ex-Jaguars tackle Tony Boselli.

This will be the fourth appearance by the Raiders in the game and the second for the Jaguars; Jacksonville’s previous participation came in the Jaguars’ first NFL exhibition game in 1995.

Also being enshrined this year from the modern-era players list are LeRoy Butler, Sam Mills and Bryant Young, plus coach Dick Vermeil, and contributor Art McNally. Branch enters from the senior category.

The game will mark the debut for Raiders head coach Josh McDaniels, who is a Canton native and played his home high school football games at Fawcett Stadium, the predecessor to the current hall stadium. Doug Pederson will work his first game as Jaguars head coach.