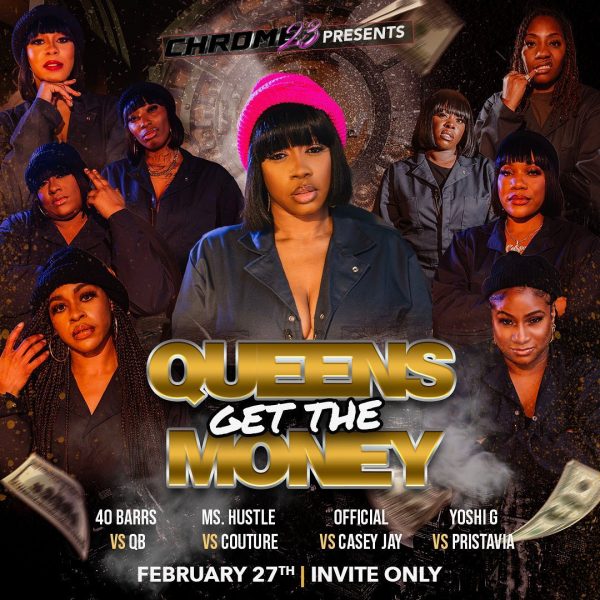 Yesterday (Feb. 27), history was made in the battle rap world. Remy Ma officially launched her all-female battle rap league, Chrome 23, with the inaugural “Queens Get The Money” inaugurated in New York City. In collaboration with Hot 97, the event was live-streamed on the veteran platform’s website and YouTube and hosted a voting system for each battle. It is the first time in battle rap history where the mysterious world of battle rap and mainstream hip-hop media join forces, ultimately toting battle rap culture to new heights.

The “Queens Get The Money” battle card match-ups included Yoshi G versus Pristavia, Casey Jay versus O’fficial, 40 B.A.R.R.S. versus QB Black Diamond, and Ms. Hustle versus Couture. Each battle was curated by Remy Ma, with careful consideration of her well-acquainted stance on modern battle rap culture.

Yoshi G, a California native, while she has been active in battle rap for the least of the last five years, she is new to the ranks of popular female battle rappers who sparred with Pristavia, a Brooklyn representative who is fresh to the performance of battle rap; reaching popularity after just a year of impressive battles. Pristavia won against Yoshi G at 72% according to the voting system and Yoshi at 28%.

Remy Ma tested the waters of curiosity as the match-up between Casey Jay and O’fficial was deemed tricky, as the two battle rappers are members of the same crew, The Bardashians, where they share a sisterhood with fellow battle rapper, Jaz the Rapper. Also, both are springing from a losing streak, despite Casey Jay standing as a present face for female battle rap. Many battle rap enthusiasts predicted the two close friends would not tackle the battle with their signature vigor. However, such was proven wrong. While facing an injury, Casey Jay still took to the stage, even though their performance ability was limited, which is a signature for Jay. O’fficial showcased several moments of nostalgia to her most prime moments. The New Orleans native ultimately won against her Bardashian sister at a mighty 83% and Texas belle Casey Jay at 17%.

QB Black Diamond, a Connecticut native a veteran in the world of battle rap, made their return to the scene after a two-year hiatus to take on female battle rap icon, 40 B.A.R.R.S. of Boston. Arguably one of the most anticipated battles of the card, the two have an extensive history that was bombarded with turmoil. It was evident in their face-off, where the two took verbal and mental blows to one another, ultimately taking on the role for the tensest match-up out of the entire card. 40 B.A.R.R.S. delivered a signature performance with elite haymakers and metaphors, validating her prediction on QB’s adapted angles. As battle rapper, Ms. Fit, who commentated alongside fellow battle rap veteran E-Hart and battle rap analyst Reda, expressed, QB came and showcased what she does best, top bars of disrespect. 40 B.A.R.R.S. won the battle at a whopping 88%, and QB at 12%.

Ms. Hustle, a Harlem native who is respectively a legend in battle rap as the first female to battle on the stage of the Ultimate Rap League and breed popularity to pioneering female battle rap league Queen of the Ring, took on one of the culture’s most treasured acts, Couture. A Rhode Island representative by way of Liberia, Couture’s presence on the Queens Get The Money card is a reappearance back to the main stage after a two-year hiatus (aside from catching an easy body against Vic Wallace last summer on Takeova Battle League). Both Ms. Hustle and Couture are regarded as top-tier battle rappers, with Hustle’s pertinent showmanship and Couture’s clever wordplay, which were two factors of judgment for last night’s performance. Overall, Couture came out as the victor of the battle at a reasonable 65%, while Ms. Hustle came in at 35%, which some battle rap enthusiasts might say is debatable. However, it is essential to note there is a difference in perception between the voters who watched the live stream and those present in the building.