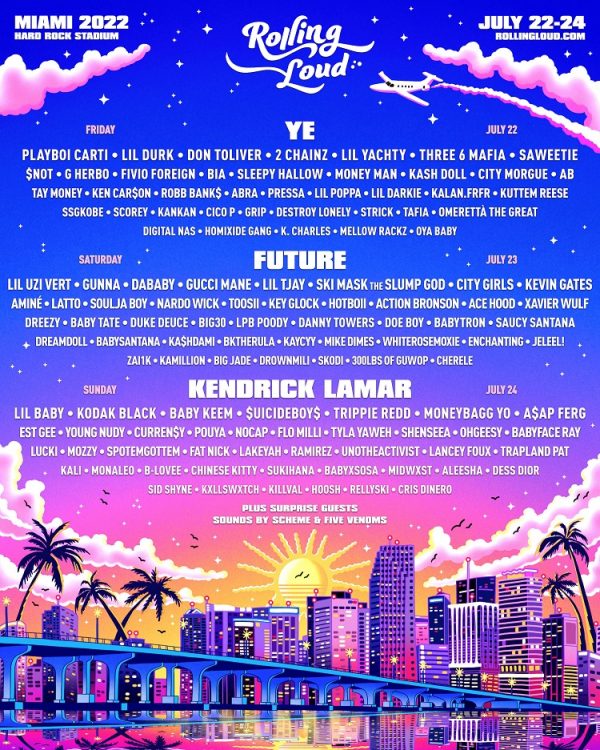 Kanye West, Kendrick Lamar, and Future will headline Rolling Loud Miami 2022, according to Rolling Loud. The world’s leading rap festival’s main event comes to Hard Rock Stadium in Miami Gardens, FL on July 22nd-24th with those first-class headliners and an undercard consisting of some of the genre’s most fascinating talents.

Future will get the opportunity to follow up his show-stopping conclusion performance from Rolling Loud California 2021, when he welcomed special guest Kanye West, during the forthcoming event, which will be Kendrick Lamar’s first Rolling Loud since Miami 2017. Meanwhile, Kanye teamed up with Rolling Loud for a one-of-a-kind Donda 2 Listening Event in Miami last week, where he performed tracks from his new album for the first time and was accompanied by celebrities like as Jack Harlow, Playboi Carti, and others.

A-listers such as Gunna, Lil Uzi Vert, Playboi Carti, Lil Baby, Lil Durk, and Saweetie, as well as rising stars such as Don Toliver, Baby Keem, City Girls, and Ski Mask The Slump God, as well as respected veterans such as Gucci Mane, 2 Chainz, Three Six Mafia, and others, will perform in Miami 2022.