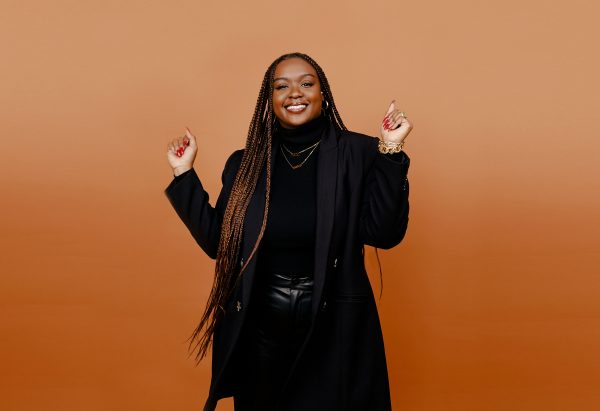 Chelsey Wilkins does everything with style and grace. The New Jersey native epitomizes fearlessness in order to achieve fulfillment. A maven, in the digital marketing median of entertainment culture, Wilkins has held distinguished positions at MTV, Pernod Ricard, Columbia Records and now Coca-Cola.

Her journey began as a Fashion editorial intern at ESSENCE, while attending Boston University. At the time, Wilkins viewed the lifestyle publication as her “dream internship.”

“ESSENCE was important to me because I grew up in a predominantly white area. I was always the only Black girl in my classes, and I really wanted to be uplifted by women who looked like me.”

While grateful for the experience, she quickly decided that it was not a long-term stay.

“Just because you love fashion doesn’t mean that you’ll like working in it,” she says.

After a few more internships while completing her bachelor’s program at Boston University, she took her style and work ethic to the house that Quincy Jones built, Vibe Magazine as a freelance writer.

Wilkin’s editorial experience would land her a role at Viacom’s (now ViacomCBS), MTV Networks. From flagship award shows to overseeing digital production, her tenure at the network proved her savviness for digital production and marketing.

One of her proudest moments stemmed from her contribution to Solange’s career defining project, A Seat at The Table. The project was released within a three-week period. Wilkins details her experience of working with Solange.

“Hearing the music and working with her team, I noticed how dedicated she was to complete her vision. It showed me that when you’re truly passionate about something you are going to push through. It was really a powerful moment in my career.”

The album’s lead single, “Cranes in the Sky,” earned Solange her first Grammy win and nomination. In 2020, the album was listed in Rolling Stone’s 500 greatest albums of all-time.

She later rose to the occasion once again when Pernod Ricard sought out someone with music industry experience to assure their brand would appear in the culture’s most relevant spaces.

“I felt very confident with my experience in that world. There were so many synergies….. artists have partnerships with spirit brands, liquor brands are typically festival sponsors as well.”

Wilkin’s expertise would help Pernod Ricard grow their digital footprint in social media due to her content creation experience for artists at Columbia. Each previous experience was preparation for the next.

“I always seek environments where I can feel free to create,” she says.

At The Cocoa Cola Company, North America, where she leads Influencer and Music partnerships, Wilkins wants to assure that Black content creators not only have a seat at the table but are aware of their value once the seat is taken. Although she works to carry out the objective on a daily basis, she is more intentional about balance now more than ever.

“For a long time, I chased a title, more money and I thought success was working more. Now I’m intentional about defining my purpose and what makes me happy,” she says.

She prides herself on an audacious demeanor to trust her instinct when making the next move. Wilkins not only credits her instinct, but her core circle, which includes a combination of close friends and family.

Success for her now means, “family, friends and good health.”

As far as recipes for success, the Harlem based executive keeps it short and sweet: “work extremely hard and enjoy the transitional process from where you are now to where you want to be.”

For Chelsey Wilkins, she carries out her recipe with a dash of chic style.

Stream DaBaby and NBA YoungBoy’s Joint Album ‘Better Than You’