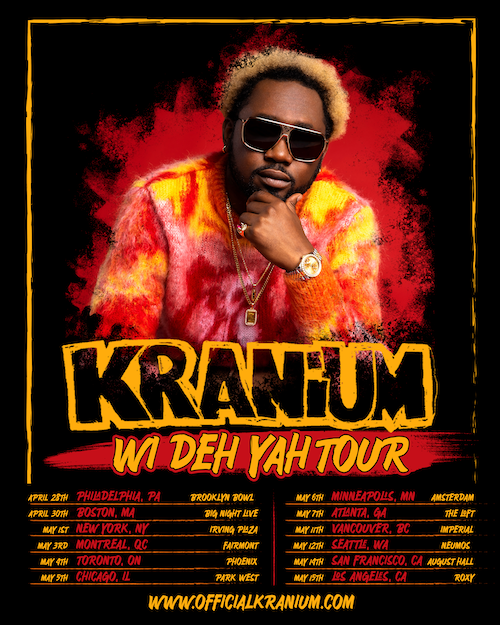 Kranium, the global dancehall sensation, has released the official music video for the first track from his upcoming album, which will be released later this year. Tanto Blacks, a prominent Dancehall deejay, co-stars in “Wi Deh Yah,” which is now available to stream.

The passionately confident track – which includes a sample of Alex Mali’s 2019 “Start It Up” – was recorded in Miami, FL with GRAMMY® Award-nominated production duo Bordeaux & Non Native, and sets the tone for Kranium’s edgy and upbeat new approach, showcasing the Jamaica-born, NYC-based artist’s clever lyrical content, rhythmic gifts, and perfectly balanced vocals that blends his signature smoothness with a bit

Kranium is quickly proving to be one of R&B/greatest Dancehall’s superstars, moving Dancehall music and culture into the future on his own terms, with many plaque achievements in the United States, Canada, and the United Kingdom markets. With his largest North American headline tour to date, Kranium will commemorate “Wi Deh Yah” and new songs. The Wi Deh Yah Tour takes off on April 28th at the Brooklyn Bowl in Philadelphia, PA, and runs until mid-May.

Tickets for all announced dates are on sale now. For complete details, please visit www.officialkranium.com/tour.