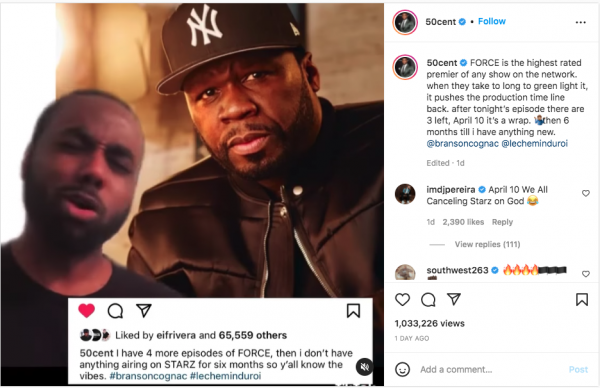 Earlier this month, TV mogul Curtis “50 Cent” Jackson seemed very incensed with his situation with the STARZ network and threatened to pull his top-rated Power Universe series from the network if they didn’t give his show some priority because of its high ratings. This weekend, Fif shared a TikTok on IG showing a committed fan mad about the show’s slow roll out.

The video post’s caption read, “I have 4 more episodes of FORCE, then I don’t have anything airing on STARZ for six months so y’all know the vibes.” The man in the video shouted, “What you mean no shows for six months!?” 50 added, “FORCE is the highest rated premier of any show on the network. when they take too long to green light it, it pushes the production time line back. after tonight’s episode there are 3 left, April 10 it’s a wrap. Then 6 months till i have anything new.”

The issues with STARZ hit the surface at the beginning of the month, saying “They suck, my deal is up and I’m out.”. He added, “Hold my calls i’m traveling,” he wrote alongside a photo of a couple of suitcases. “Getting the fvck away from STARZ. @bransoncognac @lecheminduroi. Anil get your fvcking bag’s in the car now, we are out of here, take that fvcking sign off the door no more G-unit film and television over here.”