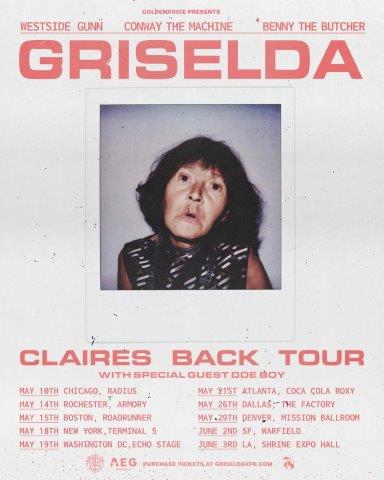 The Buffalo, NY-based hip hop collective Griselda recently announced a run of ten gigs around the US this spring. After performing at Coachella this April, Griselda will embark on their nationwide Claires Back Tour starting in Chicago on May 10 and finishing at the Shrine Expo Hall in Los Angeles on June 3. On May 15, the band will perform at the brand-new Boston venue Roadrunner as part of their tour. Tickets go on sale at 10 a.m. local time on Friday, March 25 at http://www.griseldaxfr.com/.

This will be Griselda’s first tour since they sold out back-to-back gigs at the Novo in Los Angeles in 2020. Since then, the band has been active, releasing critically acclaimed albums and performing at festivals like Day N Vegas, Made in America, and Rolling Loud.

You can see the full run of dates below.