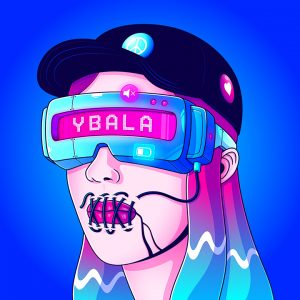 Erinem’s New Album, “Y.B.A.L.A.” Has Potential to Break the Industry

Erinem shows the depth and extent of her craft on her recently-released album, “Y.B.A.L.A.”

Born Erin Emily Wheeler, the Mensa member and lyrical genius Erinem comes to us out of the small town of Tyler, Texas. After enduring a multitude of issues during her childhood and adolescence, she has attained a level of penmanship that is above humanly possible.

Her craft is on full display in her recently-released studio album, “Y.B.A.L.A.” which was produced by ingenious engineer Guy Bartov, officially dropped March 25th, 2022. The album’s title is an acronym, which stands for “You Bitches Ain’t Listening Anyway” and is echoed in each of the titles for the 5 songs on the project. Every track is titled using one word from the album’s long-title, collectively reading “You Bitches Ain’t Listening Anyway” when reading the track-list vertically. Ultimately, the album is Erinem’s way of sticking it to the current, degraded culture of hip hop, which is focused on superficial optics and mediocre lyricism that disgraces hip hop’s origins.

The album commences with heat off the rip. Track 1, “You” is top tier in sentence configuration and punchline versatility. Not only has Erinem kept her focus on creating a bar-heavy song, but she has done it while still retaining a storyline that brings listeners into a confrontational song  full of punishing lines, verbally spanking and burning an ex-lover’s facade of loyalty to the ground.

“Bitches” sees the D-12 OG Bizarre rapping alongside Erinem. The song’s hook speaks of a longing for hip hop to be more than empty music about money and fashion brands, calling for a return to the gritty vibe and raw, untamed energy which was once hip hop’s hallmark. Erinem was hit with the concept after working with Bizarre in Detroit a few years ago. She was able to make it to his birthday party during that same trip, and this song is a somewhat-embellished account of his party, detailing a night of fun and their drug-infused adventure together.

Track 3, “Ain’t,” is based on a true story that depicts Erinem’s woes with a renowned music executive as she fought to maintain ownership of her craft and not be taken advantage of as a vulnerable upcoming artist.

“Listening” is the 4th track on the album and takes storytelling to new heights, as Erinem does something only the best can: tell a story from varying perspectives without diluting the images or wit of her bars. Fans are treated to a love story that seeks to show the true cause of their relationship’s downfall wasn’t one person or the other, but both persons involved.

“Anyway” brings the album to a close with a heart-wrenching yet inspiring confessional, detailing the truth of what many upcoming artists must face. Burdened with hardships and lack of financial resources, Erinem talks about trying to build a career and chase her dreams, even when circumstances make it increasingly complex and difficult to do so. Despite the adversity, Erinem stands firm in her pursuits. Even at her lowest, she remains committed; because, to her, hip hop isn’t simply a dream, it’s her breath, her heart, her soul, her entire life.

Erinem wants nothing more than to be a humble contributor to the genre she loves; to uplift hip hop and be an advocate for the culture. With this album, that sentiment will ring clear to hip hop lovers worldwide. Her newly-released album, “Y.B.A.L.A.” is available now everywhere music is streamed.

On other streaming  platforms: https://www.erinem.com/ybala

The post Erinem’s New Album, “Y.B.A.L.A.” Has Potential to Break the Industry appeared first on The Source.

James Harden Celebrates His Wins in Celebration at Saks