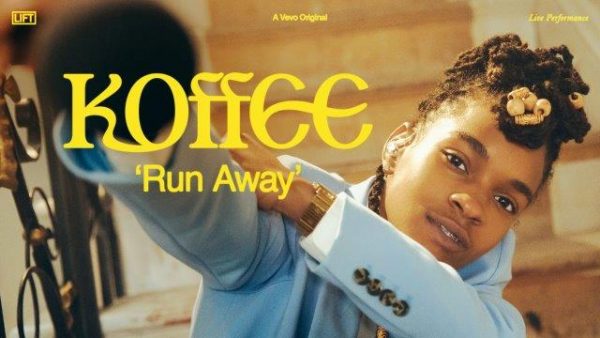 Koffee’s third and final performance in her LIFT series, “Runaway,” from her new album Gifted, was posted today on Vevo, the world’s top music video network. In 2019, Koffee debuted on Vevo as a Vevo DSCVR artist, performing performances of “Toast” and “Raggamuffin.”

“We’re thrilled to continue 2022’s LIFT program with Koffee,” says Claudia de Wolff, Vice President, C&P, EU. “Her ambition, positivity and creative energy are unmatched, all qualities that are incredibly valuable in such a heavily collaborative project. We were so excited to have the opportunity to work with her and assist in spreading such a positive, uplifting message to her fans, and hope everyone enjoys this beautiful content.”

Vevo and Koffee worked closely together to use projection, light, and set design in a neutral yet elegant venue to draw inspiration from the images and aesthetics of the West Indies. The photograph, which was taken in a townhouse in Central London, was intended to depict Koffee’s energy and positivity while she was surrounded by her band and gospel choir. The films attempted to toy with the audience’s perception of space, demonstrating that the West Indies is more than just a geographical location, but also a vibe, feeling, and power that pervades its people’s spirits.

You can see the three performances below.