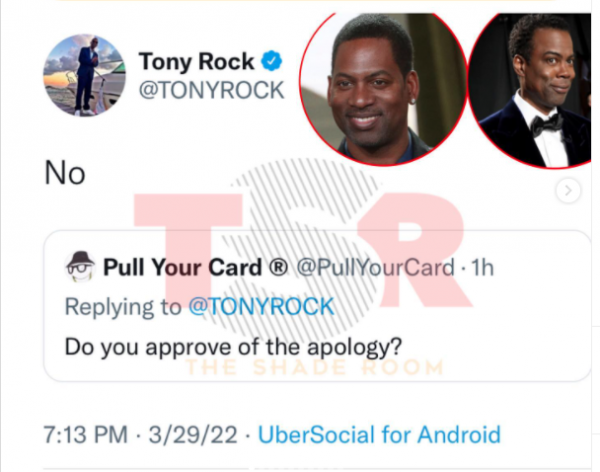 Diddy said that Chris Rock and Will Smith were still good following the slap heard around the world, but his brother comedian Tony Rock said don’t break out the olive branches just yet.

Chris Rock’s younger sibling Tony Rock held a Q&A on Twitter yesterday, where he answered questions about his brother Chris getting slapped on stage at the Oscars on live television. When one of the participants asked Tony whether he accepted the apology, Tony replied matter of factly with a resounding, “No.” Asked by another if he and his brother were going to “fight fire with fire” or take “the professional route,” Rock responded, “It’s on bro.”

Rock himself finally addressed the ordeal during a stand-up set at The Wilbur in Boston and told the audience, “I’m still trying to process what happened.”

The Source |Kim Kardashian Address The Controversial ‘Nobody Wants To Work Hard’ Quote, “It Became A Sound Bite WIth No Context”