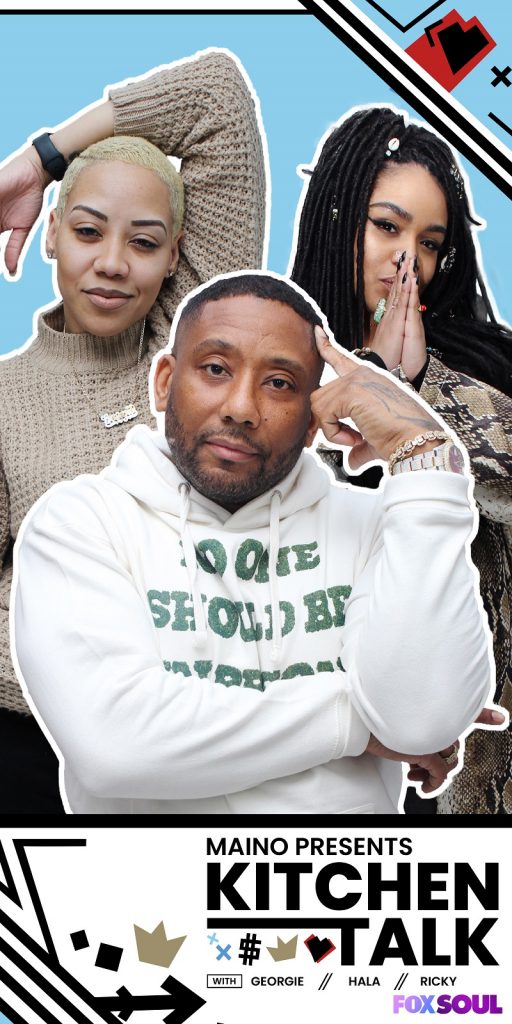 Kitchen Talk is not a culinary show or a love show; it’s a show that delivers a vibe with in-depth chats about life, co-hosted by Platinum-selling recording artist Maino, Georgie, and Hala. The stories are sometimes funny, sometimes encouraging, but they are stories for the culture at the end of the day.

“FOX SOUL partnering with Kitchen Talk gives us the ability to reach a broader audience,” says Greg J. Gavin, executive producer. “When the show first started, the vision was to be able to create an impact on the culture and reflect growth. FOX SOUL is the platform that will assist in us becoming a staple in the media business. The most important thing about this partnership is we now have a partner to help spread the VIBE.”

From a tough past to a male influence, Maino’s tale demonstrates that it’s not how you start that matters but the work you put in to change the story. Georgie, a single mother of two boys, exemplifies strength and can relate to and inspire many women of color not to let anyone or anything stand in the way of being powerful and influential. Hala is also a young woman whose faith and determination will inspire and motivate others in the future. Kitchen Talk is unscripted culture.

Kitchen Talk is a video podcast that aims to bridge the gap between cultural and transformational discussions. Kitchen Talk seeks to motivate the future generation to work hard and never quit, no matter what is thrown their way, through motivational anecdotes and celebrations of our rhythms and blues.