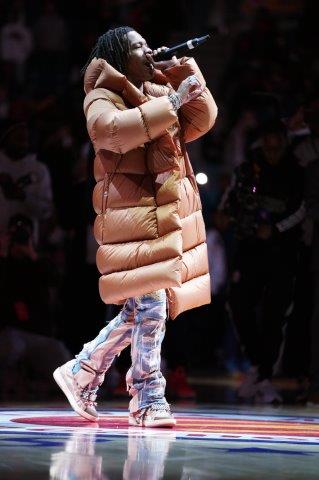 Lil Baby Embraces Having an Impact on the Youth, Provides Update on New Music

Hip-Hop and basketball are synonymous with each other. Over the eras, both arenas had key figures who stood at the forefront of this cultural partnership. Examining the landscape today, one of rap’s most influential representatives is Lil Baby. The friendship of the My Turn rapper and James Harden is chronicled throughout the media, and Baby’s love for hoops has bled into his philanthropic efforts. In December, Lil Baby teamed with another basketball lover in Hip-Hop, Meek Mill, to give back to the youth of Philadelphia in partnership with the 76ers. As fate would have it, Harden would soon join the ball club in one of league history’s biggest trade deadline deals.

Fast forward to March, and Lil Baby finds himself once again around basketball. This time with the stars of tomorrow. The superstar is in Chicago, pulling the double duty of being the halftime performer of the McDonald’s All American Game and spending time with the future of hoops like Amari Bailey, Dariq Whitehead, and Mark Mitchell on the hardwood of Wintrust Arena before the big game. Speaking with The Source ahead of his halftime performance, the positive impact of his presence is not lost on Lil Baby.

“They make me go harder,” Lil Baby said. “You have the want to go hard and get to a certain level of money. Then it’s like another feeling that can make you go hard too. It’s not about the money. It’s about the future. They look up to me. I could guide the future.”

Once it’s his time to perform, you see the importance of Lil Baby to Hip-Hop culture. Draped in an oversized coat, dripped in dancing diamonds, Lil Baby’s stroll onto the halftime floor is deafening. The players, who have spent the last week under the spotlight, immediately turn into fans. As Lil Baby moves across the court to service areas of the crowd with verses from “We Paid,” “Drip Too Hard,” and more, the entire Boys and Girls teams follow him, nearly embodying a new wave of security. Fans from courtside to the top row are enamored with every word he raps. A sign that his forthcoming music will have, at minimum, the same rate of success as his last album.

Lil Baby knows he broke a 60-year-old Billboard record on that last album, but that’s not what his concern is. “I seen that somewhere,” he said. “I seen it the other day. That’s hard, but I’m not the type to get into that.”

Lil Baby’s focus is on what next. Weeks back, he put Hip-Hop on alert. His version of JAY-Z telling the game, “Y’all got less than two months to get y’all thing together” at the end of “Show Me What You Got” in 2006. Lil Baby kept it coy when asked for an update, “You’ll see in the summer. It’s definitely coming, though.” After some prodding, he became a bit more lenient.

“I gotta start out early. So the whole summer could be up. It ain’t gonna be late summer.”