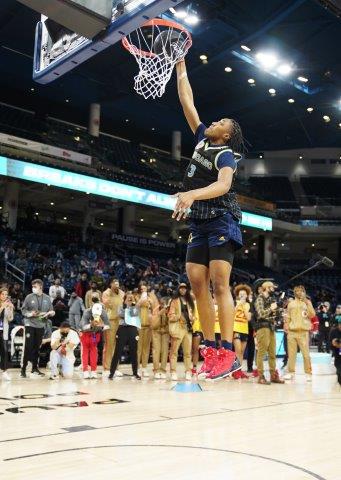 The McDonald’s All-American game made its return to Chicago. The game highlighting the best girls and boys high school basketball players around the world set up a two-night residency at the Wintrust Arena.

The POWERADE® Jam Fest shook Wintrust Arena on Monday, March 28 as part of the 45th year of the McDonald’s All American Games, as the best high school basketball players in the country showcased their skills in front of an electrifying crowd. The annual all-star event, which included a skills competition, 3-point shooting contest, and slam contest, gave spectators a preview of what to expect at the McDonald’s All American Games.

The Skills Competition was won by Indya Nivar for the girls and Mark Mitchell for the boys. Nivar is committed to Stanford, Mitchell to Duke. In the 3-Point Contest, Duke commit Ashlon Jackson represented the women, while Keyonte George who is headed to Baylor won for the men. In the dunk contest, which featured boys and girls, Ashlyn Watkins won. Watkins, who is set to head to South Carolina in the fall, is the second girl in a row to win the All-American dunk contest. During her performance, she put on Candace Parker’s Chicago Sky jersey to deliver the same dunk that the area legend did to win her dunk contest.

For the All American Game, Duke’s Dariq Whithead won the All American Game MVP award, powering the East team to a 105-81 win behind a 13 point, seven-rebound and seven assist game. Cam Whitmore hit the big stage and dropped off 19 to assist in the win. For the West, Mark Mitchell added 19 points. He was joined by Anthony Black, who verbally committed to Arkansas at the jam session.

During the women’s game, KiKi Rice led the East with a 17 point and five assist effort. Rice is headed to UCLA and faced off against Gabriela Jaquez who will join her as a Lady BRuin. Jaquez also finished with 17 points.

“We just focused on our defensive intensity,” Rice said after the win. “We came out hard and focused and having a good start. I think we did a good job of executing our game plan.”

You can see images from the game below.