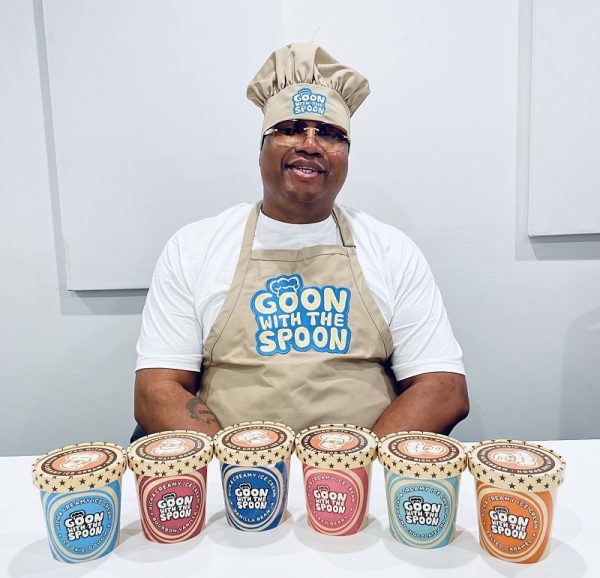 E-40, the multi-platinum hip-hop artist and entrepreneur, has announced the launch of his new ice cream under the “Goon With The Spoon” food brand umbrella, which will be available in select stores and will come in six flavors: Cookie Dough, Bourbon Vanilla, Vanilla Bean, Strawberry, Mint Chocolate, and Salted Caramel.

The famed Bay Area hip-hop musician has been working on the “Goon With The Spoon” ice cream for four years. E-40‘s ice cream was created with solar energy and contains dairy that is free of the artificial growth hormone rBST.

The news comes six months after E-40 introduced his new food brand, “Goon With The Spoon,” and launched it with a range of packed sausages and burritos. He also partnered with Justin Kinder (of Kinders Meats, Deli, and BBQ) to help launch several different sausage flavors for Goon with The Spoon, including Teriyaki Pineapple Chicken Sausage, Philly Cheesesteak Chicken Sausages, Hot Beef Sausages, Mild Beef Sausages, and Choices (Yum) Sausage Bundle, as well as Turf Burritos, as part of his expansion into the culinary industry.

E-40‘s song repertoire provided the inspiration for the “Goon With The Spoon” brand moniker, as you may know. In songs like “Back in Business” and “I Get Down (with B-Legit),” he rapped about being a “Goon With The Spoon” as an original metaphor to describe his entrepreneurial hustle and ambition.

E-40 is a chef, and his interest in the culinary arts originates from his inner-city upbringing. With his mother working three jobs, E-40 decided to teach himself how to cook and armed himself with the tools and recipes he needed to feed his siblings nutritious meals. He got a job at a high-end restaurant when he was a teenager, where he learned to create gourmet meals like chicken cordon bleu and sauteed mussels with wine sauce and butter, which sparked his love of cuisine to this day.

The ice cream is the latest addition to E-40’s burgeoning food and beverage empire. He launched two new wine varieties, Blueberry and Orangesicle, to his powerful “Earl Stevens Selections” wine brands last month, to add to his extensive portfolio of 15+ still and sparkling wines. In 2013, he released the Function Red Blend, which he called after his hit track “Function,” followed by the Sweet Red, Chardonnay, Mangoscato, Moscato and Tropiscato, among other wines.