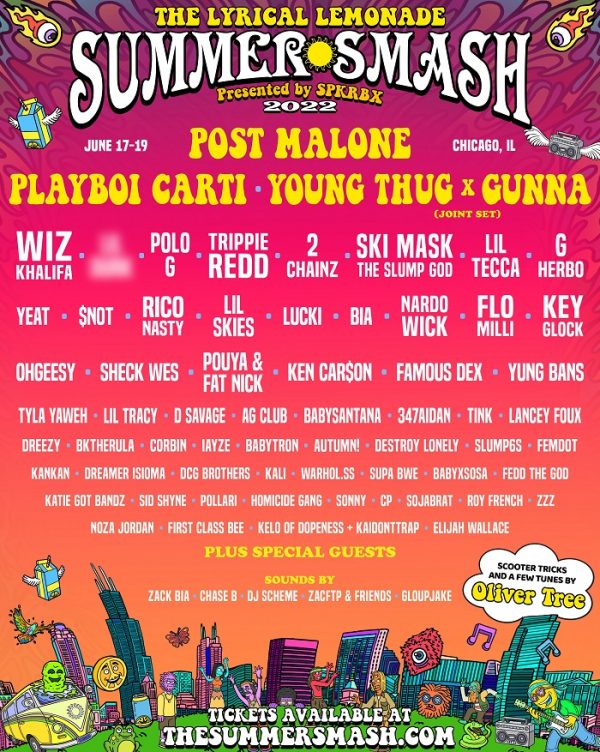 Summer Smash Festival has announced the full music lineup for this year’s three-day music festival, which will take place in Chicago, Illinois, from Friday, June 17 to Sunday, June 19. Headliners for this year’s edition include Post Malone, Young Thug, Gunna, and Playboi Carti.

The festivities will begin on Friday with a headlining performance by Grammy Award-winning rap pioneer Young Thug, who will be joined by fellow YSL Records labelmate Gunna for the Atlanta-based rap duo’s first-ever full-set collaborative performance; and will conclude on Saturday night with a performance by singer/songwriter Post Malone, who is one of the highest-selling music artists of the past quarter-century and is preparing to release his next album later this year. Following his recent “Album of the Year” nomination at the 2022 Grammy Awards in recognition of his efforts to Kanye West’s critically praised project Donda, enigmatic emcee Playboi Carti will help finish out the three-day festival on Sunday night.

Additional weekend performances include cloud rap, southern hip-hop, trap, drill, West Coast, and more, with first-time Summer Smash appearances from Wiz Khalifa, Polo G, Rico Nasty, Oliver Tree, 2 Chainz, and Ohgeesy, as well as the Chicago debut of emerging rap artist Yeat. Other notable artists include Trippie Redd, Ski Mask The Slump God, Lil Tecca, and $not, among many others, who are helping to complete the 2022 schedule.

“Today marks an exciting milestone for Summer Smash as we unveil our biggest music lineup to date. It’s been incredible to witness our fest grow into one of the largest annual music events in the country in only four short years”, said Summer Smash Festival Director and SPKRBX Founder Berto Solorio. “Our team is always striving to improve and elevate the festival experience, so we can’t wait to show our fans what we have in store this summer including bigger music acts performing on bigger stages, plus more food trucks, improved amenities, and more art installations than ever before. We’ve leveled up the entire experience.”

Tickets for the three-day GA and VIP events will go on sale this Friday, April 8, at 10:00 a.m. CST at www.TheSummerSmash.com.