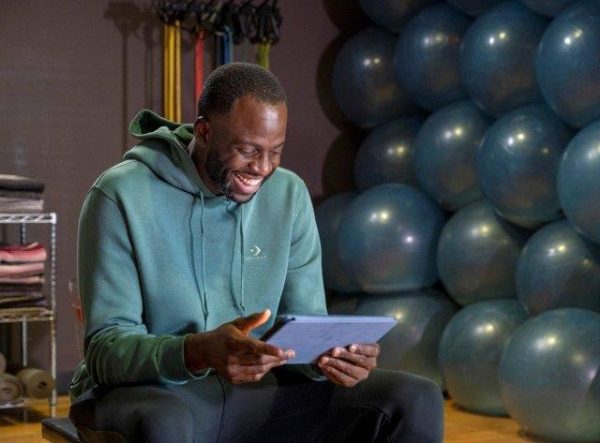 Three-time NBA Champion Draymond Green is back on the basketball court and is ready to make another title run with the Golden State Warriors. Ahead of his grueling playoff run, green has announced a new partnership with Amazon Glow, which showcases how the device keeps him engaged with his family while on the road.

Ahead of taking on Nikola Jokic and the Denver Nuggets in San Francisco at the Chase Center before a couple of games in Denver. Draymond detailed his use of the Amazon Glow, balancing work and family, and what he expects of the young players on the Golden State Warriors.

The SOURCE: You are juggling a lot! You are, of course, a basketball star, then the efforts of a businessman and media member. With that said, fatherhood is the most important, how did Amazon Glow become the tool for helping you stay connected with your children?

Draymond Green: Amazon Glow has truly bridged the gap and helped lessen the miles between myself and my children. With Amazon Glow, I am able to actively participate with my kids in their day-to-day life whether that be reading with them or helping them with cognitive learning exercises. Amazon Glow has allowed me to interact with my children and help with their upbringing even though I am hundreds of miles away.

How were you originally introduced to Amazon Glow?

I found Amazon Glow as I was constantly looking for devices to make my life easier with travel. Oftentimes, travel can interfere with family life with different school schedules, practice schedules, etc. I was looking for a way to bring me closer to my children while I am on the road and Amazon Glow is a great solution.

How did you stay connected with a busy life prior to Amazon Glow?

My wife, she is 100% the backbone of our family and keeps us all in order and the kids on track. She is the one who also fosters our relationship when I am on the road. I am extremely for her and to have the opportunity to now interact with the kids regardless of where I am in the world.

What were your initial reactions to Amazon Glow and how did it make a difference in your life?

It was amazing, the first time we used it I was able to see the kids’ pure reactions which was priceless. Being able to play games like memory match and charades with them or read with them, even while I’m far away, is everything. Glow makes it feel like we’re magically sitting side-by-side in the same room. As a parent, I want to be able to interact with my kids daily and be a part of their upbringing as much as I can, thankfully Amazon Glow has allowed me to do that.

We had a lengthy absence for you this season. How did it feel both physically and mentally getting back on the court?

Physically I feel pretty good about 85%, but mentally I feel fantastic. I have never been injured for this long before and it grew my appreciation for the game tremendously. Just to have the opportunity to do what I love again and to compete with my teammates instead of watching from home on the couch meant everything to me.

We finished the final week of the season. Had a big win against Utah. Put up a strong effort against Phoenix. And those were without Steph. What have you seen in your team these last couple of weeks and how do you view your team headed into the first round?

As a team, I think we have finally started to turn the corner. Before we were in a rut, losing a game and then winning the next, but eventually we could finally see it turning in our favor. I will say, not many teams pop out of a rut with a 50-point win. Now we are playing our brand of basketball again and it is coming at the right time.

You have played on some deep teams. This one is deep but young. How do you expect the younger guys on the team to transition into playoff basketball?

Kay Flock is Joined by Dougie B, Bory 300 and Cardi B for New Bronx Banger “Shake It”