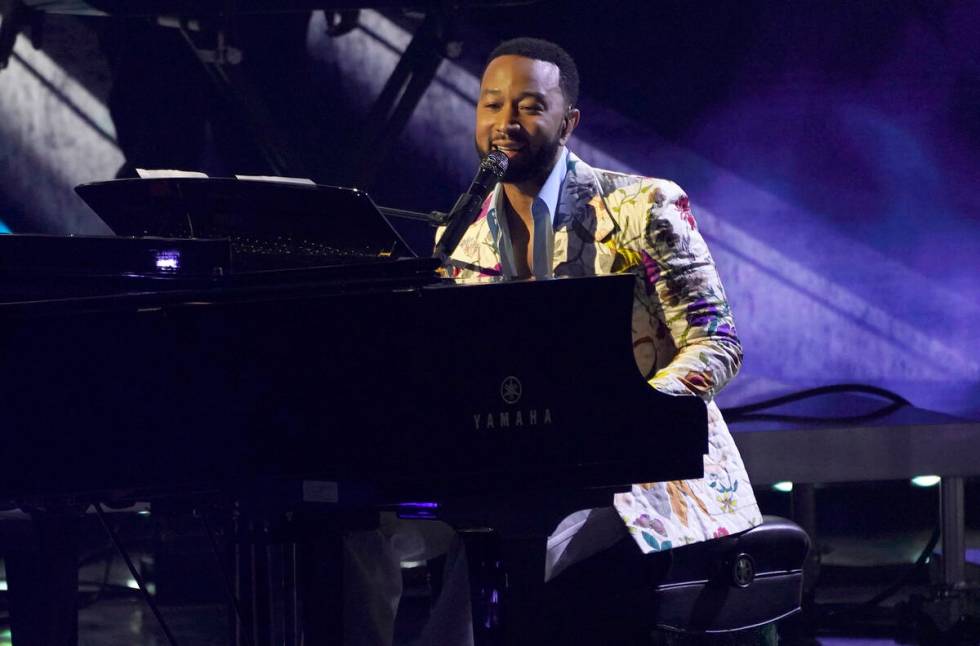 The Strip’s latest resident headliner is already a Legend. John Legend. The man whose voice sounds like the first 24 hours of your honeymoon launches “Love in Las Vegas,” described as “a beautifully intimate concert experience.” As if he’d present anything else. See Legend at 8 p.m. Friday and Saturday, with additional dates through May 7, in the Zappos Theater at Planet Hollywood Resort. Tickets start at $79 at ticketmaster.com/JohnLegendVegas.

Hang loose while you chill out at Minus5° Icebar at Mandalay Bay. The ice-bound drinkery has a colorful new collection of frozen art on display, including a totally beachin’ room filled with stylized surfboards, palm trees and tiki decor. There’s also a rock ’n’ roll gallery to thrill your inner hesher. Take it all in while sipping on a frosty but spicy pineapple punch in the 23-degree Fahrenheit, family-friendly space. Admission includes the use of a freshly dry-cleaned parka; ticket packages available at minus5experience.com.

For decades now, the Deftones have been skilled at making heavy metal that resonates with people who don’t normally like heavy metal. How do they do it? By focusing on mood and atmosphere as much heaviness and torque, their repertoire as influenced by The Cure and Depeche Mode as by Black Sabbath and Metallica. Their latest touring pairs them with progressive-minded French metallers Gojira in a fierce double bill. See them at 8 p.m. Friday at the Chelsea at The Cosmopolitan of Las Vegas. Tickets start at $49.95; ticketmaster.com.

It’s shaping up to be a who’s who of 1970s TV. The bionic duo of Lee Majors and Lindsay Wagner, “Brady Bunch” siblings Susan Olsen and Michael Lookinland, Anson Williams and Don Most of “Happy Days” and Mr. Dyn-O-Mite himself, Jimmie Walker, are among the special guests listed for this weekend’s Fanboy Expo. In addition to autographs and photo opportunities, the event promises comic artists, cosplay and vendors. It’s scheduled for Friday to Sunday at the Rio. Tickets are $25 to $30 a day for adults and $55 for the weekend. See fanboyexpo.com/lasvegas.

You may have caught multi-instrumentalist Alana Haim in her star-is-born turn as an actress in Paul Thomas Anderson’s “Licorice Pizza.” She is just as commanding on stage, however, in the band she shares with her two older sisters, Este and Danielle. Together, they swap instruments live, harmonize for days and craft glowing pop rock that’s simultaneously forward-looking and a throwback to the days when bands with guitars ruled the airwaves. See Haim at 8 p.m. Sunday at the Chelsea at The Cosmopolitan of Las Vegas. Tickets start at $39.50; livenation.com.

The Lawn at Downtown Summerlin is going to be absolutely buzzing this weekend. The Happy Earth Day Festival will feature a sustainable marketplace, beer garden and vegan snacks, along with a plant swap and a clothing swap, with the latter aiding the Shannon West Homeless Youth Center. A $10 wristband provides access to two days of activities (10 a.m.-5 p.m. Friday-Saturday). Meanwhile, registration for the Tour de Summerlin (7 a.m. Saturday), offering 20-, 40- and 80-mile bike routes, is $100. And the 10th Annual Summerlin Half Marathon (7:15 a.m. Saturday), with a route through Summerlin’s best trail parks, has a $105 registration fee.

You’ve never seen his face before. But you’ve heard his voice, which echoes the heart-in-a-vise tones of Roy Orbison and Chris Isaak. Masked country singer Orville Peck doesn’t hail from Nashville — he’s a native of South Africa. Nor does he have much in common with what’s coming out of Music City these days. Instead, he’s more evocative of the roots of country, back when the music was a cousin of rockabilly. As such, his sound is familiar and fresh at once. See him at 8 p.m. Friday at the House of Blues at Mandalay Bay. Tickets start at $32; livenation.com.

Friends coming to town for the NFL draft? Take them on an overnight excursion on the 50-foot Houseboat Hotel at Cottonwood Cove Resort & Marina. For $600 per night, the craft accommodates six guests on the mighty Colorado River and features a canopied deck complete with a barbecue grill — so pick up some rib-eye steaks at Costco before heading down to Lake Mohave. Reserve your voyage at lakemeadmohaveadventures.com.

10. ‘The Unbearable Weight of Massive Talent’

Longtime Las Vegas resident Nicolas Cage takes on the role of a lifetime — as Nicolas Cage — in “The Unbearable Weight of Massive Talent” (opens Friday, only in theaters). Desperate for money, the fictionalized Cage accepts a $1 million payday to hang out with a dangerous superfan (Pedro Pascal), where things go hilariously wrong.

We are tired of setting records | CARTOONS