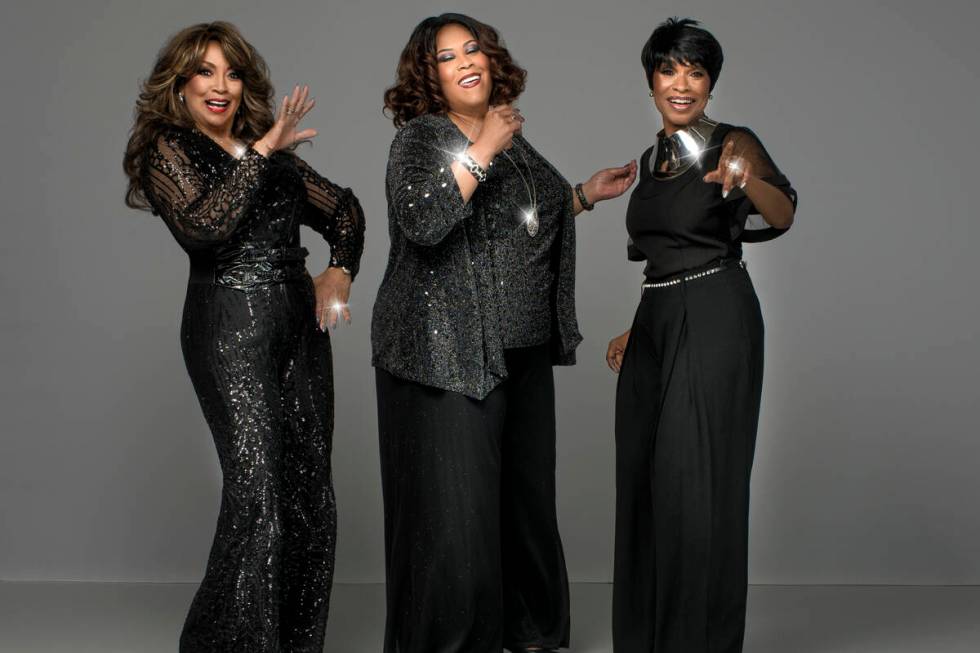 1. The First Ladies of Disco

It’ll be raining men and nostalgia alike when The First Ladies of Disco (Retro Music Box) hit town like an R&B storm front. Featuring Norma Jean Wright, formerly of Chic, Linda Clifford and original Weather Girl Martha Wash, the trio will “Dance, Dance, Dance” the night away at 7 p.m. Wednesday at Myron’s at The Smith Center. Tickets start at $49; thesmithcenter.com.

After kicking off the Grammys with a blisteringly funky performance of their Vegas-y “777” — then taking home four awards, including record of the year and song of the year — Silk Sonic is returning to town for another batch of shows. No longer thought of as Bruno Mars’ “other” Las Vegas residency, “An Evening With Silk Sonic,” starring Mars and Anderson .Paak, is a bona fide phenomenon. See it at 9 p.m. Wednesday at Dolby Live at Park MGM, with additional dates through May 29. Tickets start at $170; ticketmaster.com.

3. On the Green Martini Tour

If you’re a fan of the sleek, playful and sometimes kitschy midcentury modern look once so pervasive in Las Vegas, join the Nevada Preservation Foundation on Saturday for its On the Green Martini Tour. The big send-off to April’s Home + History month, the shaken-not-stirred evening will include small bites, a namesake cocktail (with a commemorative glass for home sipping later) and a curated tour of two exemplary homes. The foundation promises that croquet mallets will be involved, too. Think of it as all the stylish fun of “Mad Men” with none of the drama. 7:30-10 p.m. Saturday; tickets are $75 at nevadapreservation.org.

Guitars, Cadillacs, hillbilly music: It’s the only thing that keeps Dwight Yoakam hanging on — and he’s maintained his grip for four decades now, his distinct brand of honky-tonk revivalism incubated in L.A. rock circles rather than Nashville in the early ’80s. Is there such a thing as nontraditional traditionalism? Rhetorical question. Yoakam has made a career out of that very thing. He carries on at 8 p.m. Saturday at the M Pool at the M Resort. Tickets start at $20; ticketmaster.com.

5. ‘Vegas City Opera in the Movies’

“Casino.” “The Godfather.” “Pretty Woman.” They aren’t traditionally the stuff of opera, but that isn’t stopping Vegas City Opera from performing selections from those movies, as well as “Wall Street,” “The Fifth Element,” “Moonstruck,” “The Untouchables” and “The Aristocats.” That’s Disney’s “The Aristocats,” not Penn Jillette’s “The Aristocrats” which would be, um, awkward. “Vegas City Opera in the Movies” is scheduled for 7 p.m. Saturday in Sammy Davis Jr. Festival Plaza, 720 Twin Lakes Drive in Lorenzi Park. Admission is free. Low-back chairs and blankets are recommended for lawn seating.

Half Bird Chicken & Beer — the upcoming fast-casual eatery by acclaimed chef Brian Howard of Sparrow + Wolf fame — is still a ways away from opening in Chinatown. But this weekend, fans of Howard’s cuisine can stop by the Vegas Test Kitchen for a deep-fried pop-up featuring his chicken sandwiches in varieties from classic and spicy to vegan, plus other select delectables. 11 a.m.-7 p.m. through Sunday; 1020 E. Fremont St., No. 120.

“It wasn’t like I grew up wishing I was a rock star,” Billy Bob Thornton told the RJ when he hit town with the Boxmasters in August 2019. “I grew up wishing I was a pitcher for the St. Louis Cardinals. Rock star was the second choice.” The latter aspiration has been taking up much more of the actor’s time since he founded his rock band with pal J.D. Andrew in 2007. The Boxmasters, who just released their 11th album, return this weekend, rocking the Chrome Showroom at Santa Fe Station at 8 p.m. Saturday. Tickets start at $42.50; ticketmaster.com.

Do friends and family rave about your award-winning campfire chicken ’n’ dumplings? Is your peach cobbler gold medal-level? If so, gather up your cast iron pots and put the pedal to the metal like an outdoor culinary champ to Cathedral Gorge State Park for its annual Dutch Oven Cook-Off on Saturday. The gorgeous Silver State spot is just a few hours north of Las Vegas on scenic U.S. Highway 93, and there will be prizes. 1-5:30 p.m. Saturday; register at parks.nv.gov/events/dutch-oven-cook-off.

Three Square food bank’s annual Bag Childhood Hunger campaign returns for its 10th year to support programs that provide children with wholesome, nutritious meals after school, over the weekends and during the summer. Donations made through May 31 can have double the impact because of donation matching by NV Energy Foundation and Nevada Gold Mines operated by Barrick. To donate or for more information, visit threesquare.org.

Yes, we’ve “Found Out About You.” You’re a sucker for radio-friendly ’90s alt-rock. And that’s why we’re here, to let you know that an MTV staple of that era, the Gin Blossoms, will return to town at 8 p.m. Saturday at the Backyard Amphitheater at Green Valley Ranch Resort. Tickets start at $27.50; ticketmaster.com.