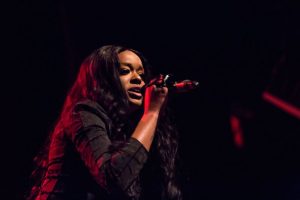 Azealia Banks hit Instagram and called out rappers, music executives, and ultimately how all the parties involved led to the murders of artists. “Hiphop audiences are so ghetto and backwards sometime,” Banks opened.

“We need an intellectual glow up fucking pronto,” Banks added. “We cannot be this addicted to/excited about such run of the mill human shit. Knowing that most MEN and WOMEN IN THE ENTERTAINMENT INDUSTRY will exchange sexual favors for Job opportunities is not news. The difference is: these white actors who are sucking dick for lead roles aren’t shooting and killing one another!!!!”

Banks would double back to let rappers know murder in Hip-Hop is not the way. “This Hip Hop murder shit really has to fucking stop. It’s not fun. It’s not gangsta, it’s not cool, it’s like, it’s ruining fucking everything.”

You can see her full message here.

Banks is not the only one pushing to stop guns and murder in Hip-Hop. Earlier this year, Bobby shared a new set of images on Instagram where he enjoyed the company of a massive group of women and shared a message to put the guns down in music videos.

“I don’t wanna see nooo guns in Videos this year str8 Gyal,” Bobby wrote. “Y’all niggas ain’t using them anyway you on the gram with it niggga.”

Bobby Shmurda has been promoting messages of celebrating life and having fun recently. Back in the holiday season, Bobby promoted enjoying your freedom during his first Christmas after prison.

“This my first Christmas home in 7 years. Don’t take this holiday for granted ya’ll. Hit the people you love! And answer those jail calls,” Bobby Shmurda wrote on social media.

The post Azealia Banks Speaks Against Murder in Hip Hop: “It’s Not Gangsta, It’s Not Cool” appeared first on The Source.

Justin Bieber and Don Toliver Team Up on ‘Honest’