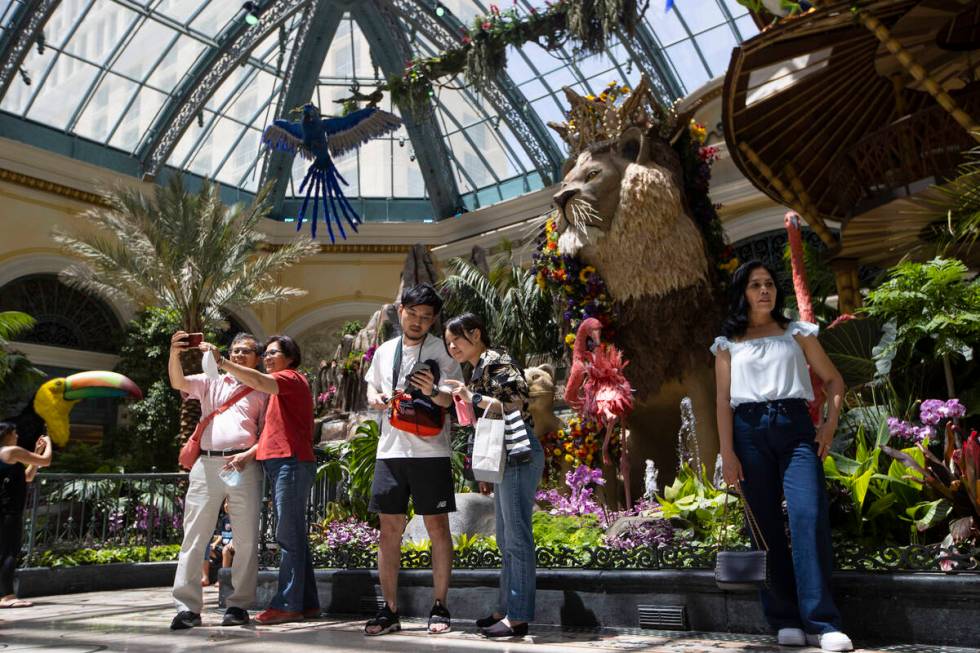 The Bellagio’s Conservatory & Botanical Gardens debuted its summer display Tuesday titled “Jungle of Dreams,” which features tropical plants and flowers from around the world.

The display celebrates the coronation of the king of the jungle, a 20-foot tall lion sculpture, with the sounds of nature and a theatrical soundtrack to accompany the space.

Jessica Walker, director of horticulture operations at MGM Resorts International, said setting up displays takes a week with a team of over 80 people working around the clock. Shows are planned up to six months to a year in advance.

Seeing happy guests is what makes it all worthwhile, Walker said.

“Just having (people) enjoy the space, it just makes us all feel really proud and want to do it even better and grander the next time,” Walker said.

The 28 animal sculptures featured in the display are made completely out of organic material, Walker said.

The lion sculpture is made from wheat and barley seeds, cut oat and grass seeds. His crown features 2,500 preserved pampas grass plumes. The coats of the giraffe sculptures were made from brown and golden flax seeds (900 pounds worth of them, to be exact).

“There’s so many little details here that I really think that you need to come a couple times, because there’s so many intricate details that you didn’t pick up on the first time,” Walker said.

For designer Ed Libby, creating the display was a dream come true.

“Working with the talented Bellagio horticulture team, we took a scene that is captivating, visual and dramatic and brought it to life as only Bellagio can,” Libby said in a statement.

The show is on display through Sept. 10.