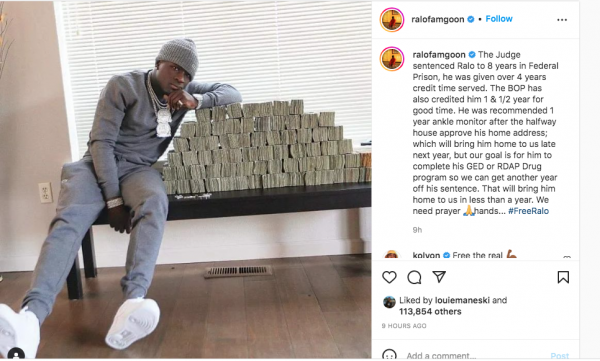 After awaiting trial in the Dekalb County Jail since his federal arrest for marijuana trafficking in 2018, 1017 artist Ralo, whose real name is Terrell Davis, can breathe a sigh of relief after being sentenced to eight years in federal prison.

Why? Well, after the time served is granted by a federal judge and Ralo receives his anticipated good time, which could be up to a year and a half, the accused drug trafficker and ATL mainstay could see the streets as early as next year.

On an IG post from Ralo’s verified account, where the news of his sentence was also confirmed, an update on the sentence handed down said, “He was recommended 1 year ankle monitor after the halfway house approve his home address; which will bring him home to us late next year, but our goal is for him to complete his GED or RDAP Drug program so we can get another year off his sentence. That will bring him home to us in less than a year. We need prayer.”

In 2018, an affidavit filed by the U.S. Attorney claimed Ralo was the leader of a street gang called “Famerica”, that is known to have smuggled almost $2 million worth of weed from Cali to Georgia.