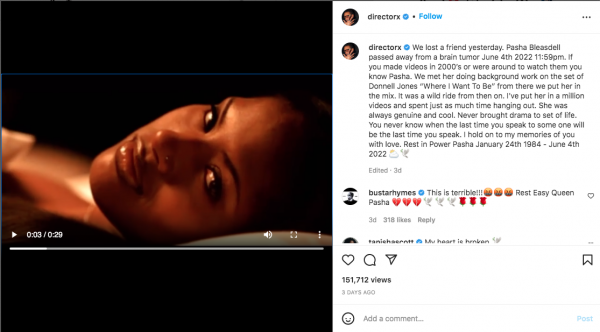 Several accredited reports have confirmed the sad news that model Pasha Bleasdell has died at the age of 38. The news was originally given by Bleasdell’s longtime friend Director X, who told the tragic news via Instagram on Wednesday.

“We lost a friend yesterday,” X wrote on his IG page. “Pasha Bleasdell passed away from a brain tumor June 4th 2022 11:59pm. If you made videos in 2000’s or were around to watch them you know Pasha. We met her doing background work on the set of Donnell Jones’ ‘Where I Want To Be’ [and] from there we put her in the mix. It was a wild ride from then on.”

“I’ve put her in a million videos and spent just as much time hanging out. She was always genuine and cool. Never brought drama to set of life,” X added. “You never know when the last time you speak to some one will be the last time you speak. I hold on to my memories of you with love. Rest in Power Pasha January 24th 1984 – June 4th 2022.”