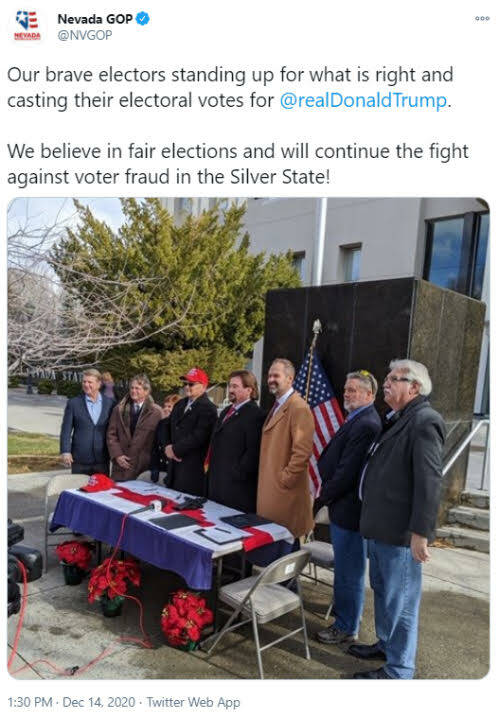 FBI agents are sending the cellphone they seized from Nevada Republican Party Chairman Michael McDonald to Washington, D.C., as part of the Justice Department’s investigation into an alleged conspiracy to block Congress from certifying the 2020 presidential election, a knowledgeable source said Thursday.

McDonald is among a half-dozen Nevada Republicans who participated in December 2020 in the signing of alternate electoral vote certificates in the presidential race.

The Washington Post reported Wednesday that the Justice Department is widening its investigation into how political supporters of former President Donald Trump tried to use invalid electors to prevent Biden from taking office. The alternate electoral slates stemmed from unfounded claims of widespread voter fraud.

An FBI agent in Las Vegas obtained the cellphone from McDonald about 1 p.m. Wednesday after serving him with a search warrant, the source said.

Agents also were attempting to seize phones from other Nevada Republicans who participated in the signing event, according to the source.

The warrant, signed by U.S. Magistrate Judge Nancy Koppe, said the Justice Department was investigating criminal charges of obstruction, conspiracy and false statements related to the congressional certification of the Electoral College vote that took place on Jan. 6, 2021. Pro-Trump rioters stormed the Capitol that day delaying the process.

“The U.S. attorney’s office typically does not confirm the existence of investigations and has no comment,” he said.

It is not known whether McDonald is a target of the Justice Department investigation, but there has been speculation that investigators are interested in whether he had communications during the fake electors event with Trump associates.

Earlier this year, the House committee sent letters to McDonald and Jim DeGraffenreid, the Nevada GOP’s national committeeman, seeking records and testimony from them.

Committee investigators later questioned McDonald under oath, and he provided the panel with documents.

In a Nevada Republican Party news release at the time the illegitimate electors gathered, McDonald said “with ongoing challenges and evidence left to be meaningfully investigated,” his slate of electors had to submit votes for what he claimed was the rightful winner and allow Congress to decide. McDonald and other signatories and supporters of the fake elector certificates posed for a picture in front of the legislative building in Carson City that was tweeted out by the state party, which added, “our brave electors standing up for what is right and casting their electoral votes for @realDonaldTrump.”

On the same day the fake electoral certificates were signed, Secretary of State Barbara Cegavske presided over the meeting of actual electors to certify Biden’s victory in Nevada.

This is a developing story. Check back for updates.

But it’s the best recovery | CARTOONS

‘Elvis,’ Primus and Steven Wright this week in Las Vegas