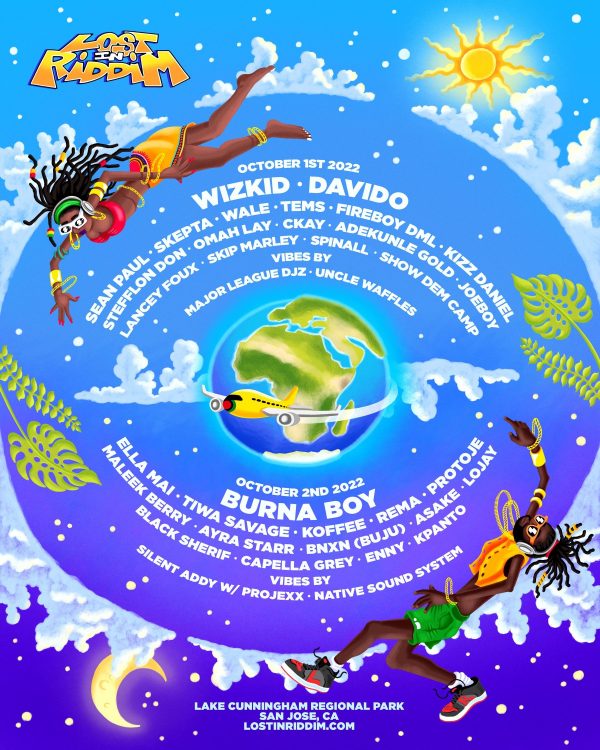 The renowned R&B/hip-hop/soul music festival Sol Blume’s organizers have announced their afrobeats music festival, Lost In Riddim, which will take place this fall on October 1-2.

Wizkid, Burna Boy, and Davido, three of Nigeria’s top performers, will coheadline the event with other international performers like Ella Mai, Skepta, Kizz Daniel, Sean Paul, Tems, and others in honor of Nigerian Independence Day Weekend the exact same weekend.

The festival is moving to Lake Cunningham Park in San Jose, California, just southwest of its previous home in Sacramento after a successful first event last fall. The outdoor festival will have a significantly wider footprint, two main stages with non-overlapping performances for audiences, a third, much smaller tent stage, and all-day DJ sets.

This year’s festivities will be more accessible to attendees than ever thanks to the new venue in San Jose, which also provides more activations, immersive art, vendors, and space for dancing with other music lovers inside the festival, as well as more transportation and lodging options for out-of-town visitors.

“As proud children of immigrant parents, we created Lost In Riddim because we wanted to offer a festival experience more authentic to ourselves and our culture. Something that speaks to us not only as music fans, but who we are as people,” said Fornati Kumeh, festival co-founder and talent buyer. “With a new and larger location, not to mention this incredible lineup of international artists locked in to perform, I’m expecting this to be a weekend for the record books. We really hope fans worldwide will come show out at Lost In Riddim this October.”

The festival, like its predecessor, will also feature popular forms of African, Caribbean, and Black American music, such as reggae, dancehall, afro-fusion, hip-hop, R&B, and others. International superstars like Ella Mai and Skepta, both from the United Kingdom, are notable performers outside of the afrobeats genre. A number of Jamaican artists, such Sean Paul and Koffee, have also been added to the lineup, along with hip-hop artists like the Grammy Award-winning rapper Wale, who is from Washington, D.C.

You can see the full lineup below and learn more about tickets here.

The Source |Red Bull BC One Announces Winner Of Philadelphia Cypher