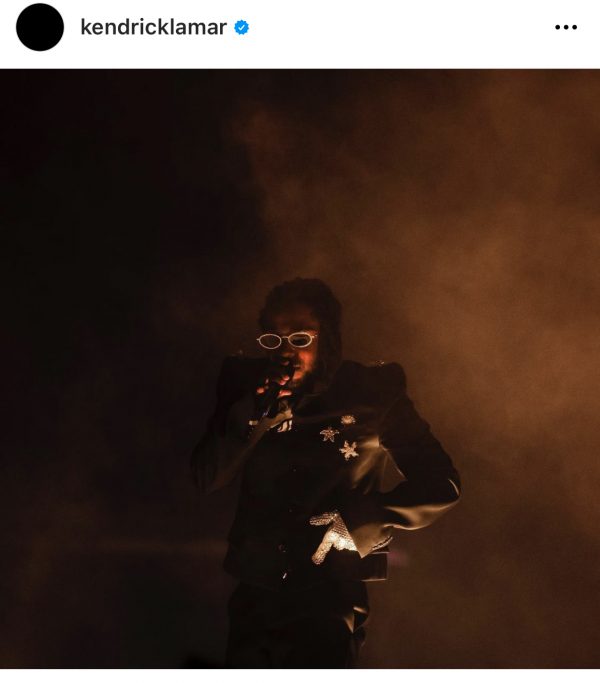 Kendrick Lamar may be in the middle of his “Big Steppers” tour, but he’s apparently not too busy performing to share his perception of his experience with fans. The artist took to Instagram on Wednesday afternoon where he uploaded 50 artistic photos of his recent tour along with a heartfelt and introspective message to his fans about his artistic struggles and motivation.

He uploaded the photos in just over an hour with no captions. Most of the photos, which appear to have been shot by a professional photographer, show Lamar performing a variety of his hits, often with dazzling special effects in the background. However, some are close crops of his outfits or props while others are silouhettes and wide panoramic shots that would look almost abstract if viewed too quickly.

While the photos did not have captions, the photo dump was accompanied by a heartfelt message in which he described his artistic struggle to create “Mother I Sober,” a song off his latest album Mr. Morale & The Big Steppers. The story read:

“ngl jesus jojo and mary. took a n**** 20 years to find mother i sober. rap has truly helped my expansion of self. beyond the perception of who I believe to be. on jojo. music is air to a young n**** at this point. mr. morale. the catalyst of my self expression. ill never forget the process of falling in love with imperfection. the piano. my fans. the stories of reconciliation i hear from penitentiaries to small villages. Some words will find you today. Some will find you in 10. find your children type sh**. sitting in like an old book. im forever underground. infiltrating the mainstream a la carte. these cities still beautiful to watch. on jojo. ily -ok ok!”

Dates for the “Big Steppers” tour can be found here: https://www.livenationentertainment.com/2022/05/kendrick-lamar-announces-the-big-steppers-tour/.