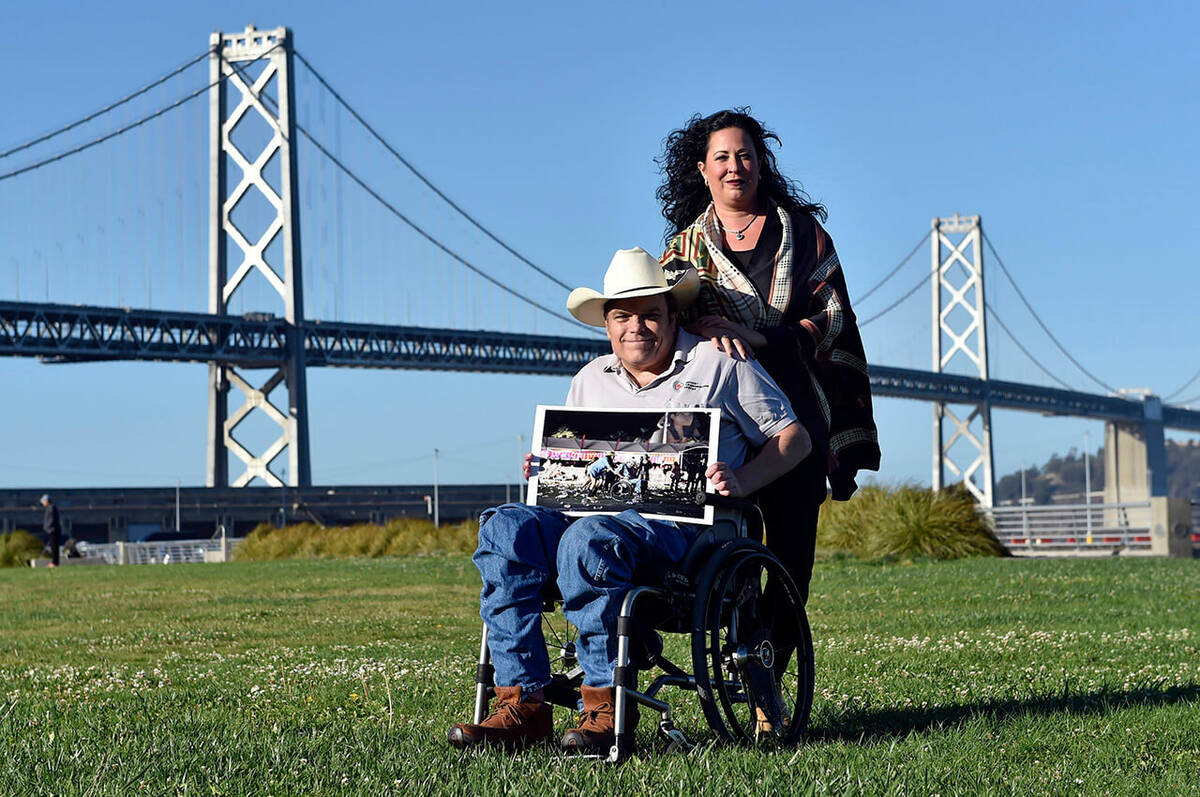 Route 91 photographer finds sources of hope in those he saw

Much has been written about that tragic night. Almost every story starts the same. My story is no different.

When the popping sounds began, I wasn’t sure what they were — I was told it was fireworks and then someone said it was the speakers. Singer Jason Aldean, the final act the crowd had been waiting for, was on stage performing. Of the 22,000 concertgoers, many made the Route 91 Harvest music festival an annual happening, and it was an event I’d enjoyed photographing for years. It was a celebratory get-together of country music fans.

Until something dark and unthinkable began to unfold.

I was in a media tent processing photos from the day’s concert when I heard the sounds that many of us will never forget. As the sounds continued, frightened concertgoers began fleeing in what I thought might be a mass panic.

The lights on the concert field had been turned off, and I couldn’t see clearly what was happening. However, years of training as a photojournalist caused muscle memory to kick in as I picked up my cameras to photograph the chaos.

People running in all directions, some lying on the ground, others who appeared to be seeking cover and many in tears. It may sound irrational, but at the time I didn’t comprehend what was going on.

Now, five years later, I want to share what I’ve learned from the experiences of people whose images I captured in one of the worst moments of their lives.

Some have told me that for them, the images from that night offer a way to heal. They record a moment bounded in time and space. They show individuals doing heroic acts with no thought of the danger they put themselves in. I’ve had the privilege of meeting and getting to know some of these people, humbled that they share their stories with me — stories of survival, hope and healing.

In telling these stories, we honor the memory of the 58 lost that night and the two who later succumbed to their injuries, we lift up the many injured and recovering, and encourage those still struggling.

Perhaps these stories will give you hope — as they give me.

I’ll begin with my own experience as a witness and survivor of a mass shooting. After returning to the now darkened media tent, I saw what my camera had captured as horrific images began opening on my computer screen. Shock tore through my body, and my hands began to shake uncontrollably. I thought my heart might pound out of my chest. But I knew that I was witness to this for a reason.

I believed the world needed to see what happened on October 1, 2017. Within moments of uploading photos to Getty Images, my phone began to buzz with calls from media outlets around the globe seeking comment. Initially I declined them all. I felt the focus should be on those wounded and those who weren’t going home.

So many lost and so much grief, the shock left me numb. I wanted to sleep although I couldn’t.

The night before, I told myself over and over, “David, it’s just the speakers.” But on a deeper level I remember thinking, “This can’t be happening.”

The next morning after the shooting, I had no idea what was to come. Colleagues — many I hadn’t seen in years — called to check on me. Their support meant more than I can say. I accepted an offer for counseling from Getty Images. This became critical for me as I tried to come to grips with what I’d witnessed, unknowingly at the time it was happening. I was in a state of disbelief and could not process what I had seen.

If you think you know what you might do, be careful not to judge. No one knows for sure what they’ll do. There is no right or wrong — it’s how you react. Without any forethought, I reacted as I was trained — as a photojournalist.

Perhaps a soldier will react immediately knowing what those sounds are and his training will kick in. But choosing to stay and help others when you could run takes something truly exceptional. Yet the young Army veteran in one photograph doesn’t want to be thought of as a hero — even though his actions saved lives and are undeniably heroic. Just ask his childhood friend whom he shielded from flying bullets with his own body. Or ask the many others he helped that night.

Another photograph shows fearlessness to rise even though wounded. As gunshots rained down around them, two women huddled together on the ground — one shot in the leg and the other, not wanting to leave her alone, remained by her side. Then an unknown stranger lay down with them until a break in the shooting, when he encouraged them to run. You might wonder, how someone can run with a wounded leg. Imagine leaning on that inner strength — finding the will to rise with the support of others.

A nurse knows how to tend to the wounded, but staying in the line of fire to help someone in a wheelchair — someone you hadn’t met until that night — takes something that seems almost superhuman. The resolve to save another’s life and the courage to meet the moment’s need is beyond imagining. This shows the very best that a human being can be.

Other concertgoers — running to escape gunfire — stepped in to aid and comfort the injured.

More of the best people can offer — not just a helping hand, but a determination to help each other survive.

David Becker’s images from the Route 91 Harvest festival mass shooting in 2017 are seared into the nation’s collective memory — terrified concertgoers in cowboy hats running hand-in-hand, countless people helping others escape, and the scattered belongings left behind on the festival grounds. In the years since, he has reunited with some of those he photographed that night. In these portraits, they hold photographs of themselves from the night that changed so many lives forever.

I’ve said that there is no right or wrong. There is no time to think under such circumstances.

Just react — and the reactions of many saved many lives.

Here’s what I most want to say. Light shone in the darkness as people performed courageous and selfless deeds.

Thinking about them gives me hope.

I will never forget what I witnessed firsthand. Hearing their stories and getting to know some of these people has been a privilege — as we remember those who did not make it home that night.

We honor the memories of those lost each time we tell the stories of those who survived. I am just one of them, and this is my story.