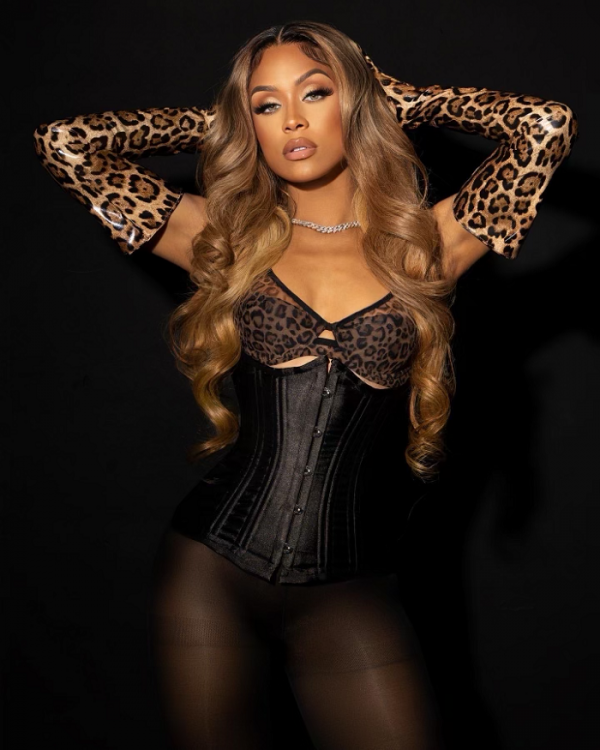 Jilly is an LA-based R&B/Pop artist with 2.5 million IG followers who recently dropped her debut project COPY & Paste, and her music video for Like That (my fave song off the project) garnered over 1 million views in less than 5 days. Producers on the EP include Lil Rich (YG, Machine Gun Kelly, DaBaby, City Girls) and Lab Ox (Rihanna, Nicki Minaj, 50 Cent).

Jilly, who first made a name for herself as a YouTube sensation with her family, has opened for 2Chainz and recently did a live MTV Jam Session live on the MTV IG channel.

THE SOURCE: What’s your name, and where are you from?

Jilly: My name is Jillyan Anais Moor, but I go by Jilly. I am from Houston, TX, born and raised.

Who or what inspired you to make music?

Growing up in Houston, which is such a soulful place to grow up, I looked up to Destiny’s Child. Destiny’s Child, Slim Thug, Bun B, Lil Keke…there are so many people that were such icons in my city that played a huge part in my wanting to grow up and make music my profession.

Aside from that, the inspiration really came from just being on the big stage at a very young age. My parents had me in competitive cheer and competitive dance. I played volleyball, soccer, and basketball and ran track. I did karate, martial arts, and piano. I was in school musicals, and I took vocal lessons. And just that form of competition and entertainment started off at a very young age for me, and I grew a love for it. I grew a love for the stage, I grew a love for performing to my best ability. As I grew up and continued school musicals and dancing, I knew that music, performing, and dancing were something that I wanted to do even after school. So that is something that inspired me to be a musician, an artist.

How would you describe your musical style?

I would describe my style of music as R&B Pop because I give you that soulful sound with that poppy feel.

How would you describe your style?

I would describe my fashion style as edgy, sexy, classy, and ultimately Jilly. My style is unique and fun and just really gives “that girl” vibes.

In what way do you aim to make a difference?

I just continue to be me. I think just me always remaining true to who I am is the difference, and it’s making the difference. Not conforming to what society wants you to be and just staying true to my natural self. Who I am. Who my parents raised me to be.

How would you describe the music that you typically create?

I would describe the music that I typically create as a vibe. I’m such a vibey person, so I think the elements that I’m in when I’m creating just really go off my mood. It all depends because I create so many different types of music. I’m always elevating my craft and my art – I never stay stagnant. I believe if you stay stagnant, you are not growing. I would just describe my music as a big vibe.

My creative process in the studio is, first and foremost, to leave the outside world outside. When I come into the studio to create, that’s my happy place away from reality. And so the majority of the time when I’m in the studio, there are times when I obviously write and want to create with the space and the mindset that I’m in. But usually, it’s my getaway. Sometimes it’s my escape from reality where I don’t want to talk about what’s going on in my life. And it just brings me to a space where I can literally escape and don’t have to talk about what’s going on. So that’s where I create those fun and party-like songs, that way I don’t have to get in my feelings. There are also those times that as an artist you have to show that vulnerability and so day by day I’m learning to slowly start doing that more, to connect with my audience and fans, and to let them know at the end of the day that I’m a real person who goes through real things too. So that’s what I did with my EP COPY & Paste. I feel like with “Ready” and “Throwback,” I was able to show a more vulnerable side than I have shown in the past.

What’s next for you?

I just filmed the music video for my single “Throwback,” which I am super excited about. We are in the editing process, and that will be released very soon. So stay tuned for the Throwback music video! Other than that, everything is next. I’m not stopping, I’m not slowing down at all. So just be prepared to see Jilly everywhere. On your big screens, on every billboard, all over because it’s Jilly season. It’s Jilly time. It is the Jilly takeover.

“Throwback” was the vibe that I was in when I came to the studio that day. I just felt soo bossy, soo clean, soo fly. I just felt that it needed to be said. Like, at the end of the day, you know – I’m too clean, I’m too fly, I’m too dope for the b******* really. And that’s really how the vibe came about. I just really wanted to talk my shit and put it in a soulful, dope way, and that’s how “Throwback” came about. It was really just a moment I was feeling, and little did I know that I was walking into the studio to create one of my favorite songs thus far.

Ooh..that’s hard because all Jilly songs are my favorite. But I would say a non-Jilly song would have to be “Soldier” by Destiny’s Child. Destiny’s Child is a complete classic catalog in general, and especially being from Houston – I grew up with them. I am forever going to be a Destiny’s Child fan.

The last song I listened to in my car was “Alien Superstar” by Beyonce. I love my girl B, and her album RENAISSANCE is just growing on me, literally day by day and more. And “Alien Superstar” is by far my favorite.

What advice would you give to any artists trying to get on?

I would tell any artist to keep on going. If this is your dream, your passion, and the only thing that you see, don’t take no for an answer. I don’t have a Plan B. So I would say if you have a Plan B, that means you’re not focused solely on Plan A. Put all your eggs in one basket when it comes to this, and give it your all. Don’t take no for an answer, and keep on keeping on.