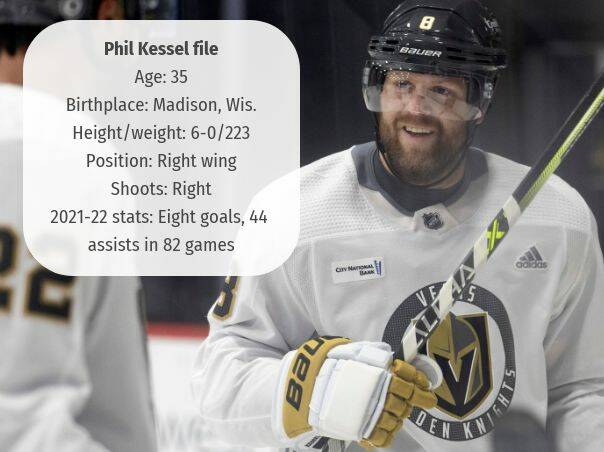 Golden Knights’ Phil Kessel looks to get career back on track

The veteran right wing has often said since signing with his new team Aug. 24 that he thought he got lost the previous three seasons in Arizona. He wasn’t held in the same regard. He was written off. At least as much as someone with 956 career points and two Stanley Cups can be.

Kessel is out to put himself back on the map with the Knights, and it looks as if he’s ready to enjoy himself doing so. The 35-year-old is coming off the lowest goal-scoring output of his 16-year career, but he believes he still has plenty to offer.

The team is counting on it.

Kessel’s accomplishments speak for themselves.

He ranks 11th all time in scoring among Americans. His 399 goals are the 13th-most by an active player. His consecutive games streak of 982 is seven off the all-time NHL record.

That doesn’t even take into account his playoff accomplishments. Kessel had 18 goals and 45 points in 49 postseason games in 2016 and 2017 to help the Pittsburgh Penguins win two straight Stanley Cups.

He’s also a legendary character. Former coach Rick Tocchet said Kessel once challenged him to a chin-up contest before Game 7 of a playoff series. He keeps things loose.

“I’m lucky I get to sit next to him in the locker room and hear him talk every day,” center Jack Eichel said. “He keeps me and (stallmate Mark Stone) entertained.”

Despite all he’s done, Kessel still wants to contribute to a winning team again after three difficult seasons in Arizona.

He will have to show he’s still the offensive force he’s been for most of his career to do so. He scored only eight goals last season with the Coyotes while tallying a team-high 44 assists. His 4.6 shooting percentage was his lowest and well off his career mark of 10.8 percent.

He needs those numbers to rebound with the Knights because he’s never been known as the most well-rounded player when it comes to his play away from the puck. But when he has it, he shines.

“His release, he’s still got it,” said NHL Network analyst Mike Rupp, who has played against Kessel. “And he’s a fantastic passer.”

The Knights signed Kessel to a one-year, $1.5 million contract for those offensive attributes. They lost a lot of scoring with the departures of right wing Evgenii Dadonov and left wings Max Pacioretty and Mattias Janmark. They’re counting on a motivated Kessel to fill that void.

“That was part of this,” general manager Kelly McCrimmon said. “He’s excited and wants to have a really good year.”

The Knights are putting Kessel in a position to succeed. He was on Eichel’s wing to begin training camp to form what could be a dynamic one-two punch. Kessel should get plenty of scoring chances if he stays there.

It will be on him to take advantage and show he can finish better than he did last season in Arizona.

“Obviously, that’s not who I am,” Kessel said. “I want to prove I still have a lot in me.”