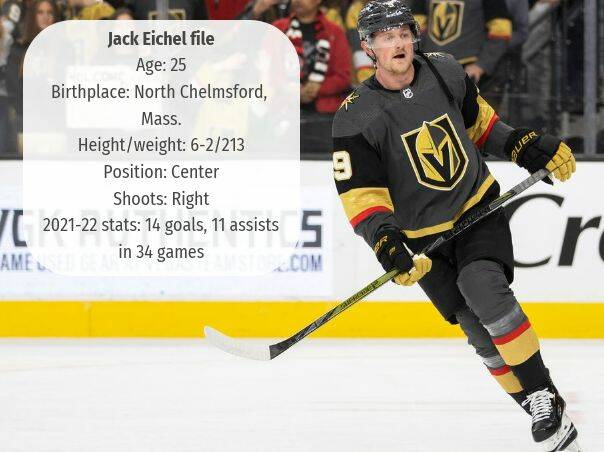 That’s no surprise to anyone who has followed the 25-year-old center. General manager Kelly McCrimmon and center Chandler Stephenson say he’s the first one on and the last one off the ice every day. Former coach Pete DeBoer said he had to talk with Eichel about staying out too long only two weeks after his return from neck surgery.

Eichel’s work ethic turned him into the No. 2 overall pick in 2015. It has led to three All-Star Game appearances and an eighth-place finish in the Hart Trophy voting in 2020. He’s become one of hockey’s premier players.

The one thing that has eluded him in the NHL is team success. Eichel is entering his eighth season and has never appeared in a playoff game. This season is his best chance to change that.

He’s settled after joining the Knights in a blockbluster trade Nov. 4. He’s healthy after battling injuries the past two seasons. He’s had a full summer to prepare.

He appears ready to show what he can do.

“(This offseason) was important for just getting to a good place mentally and physically,” Eichel said. “It just allowed me to find my groove again.”

He has 153 goals and 380 points in 409 NHL games for a reason. His shot explodes off his stick. His passes dance around defenders. He protects the puck in tight areas so well it almost seems glued to his tape.

What stands out to NHL Network analyst Mike Rupp the most is the deception with which Eichel plays the game. His upright skating stance is hard to read. He can look as if he’s coasting and still move fast down the ice.

“It’s just very hard for a defenseman to get a proper gap on him because his body is selling three different things,” said Rupp, who played 610 NHL games. “That’s what makes him so talented.”

The Knights leaned on Eichel’s skills more than a few times last season.

They were tied with the Ottawa Senators in the third period March 6 and got a last-minute power play. Left wing Max Pacioretty fired a shot on net that defenseman Nick Holden blocked. The puck bounced to Eichel in the left circle. It left his blade so fast that goaltender Anton Forsberg, who made 40 saves that night, couldn’t recover.

The puck went in the net with 5.2 seconds remaining. The Knights won 2-1, all because of maybe the most skilled player they’ve had.

“He stands out every time he touches the puck,” center Nicolas Roy said. “He’s dangerous. You see it. Even if he gets it in the D-zone, he’ll make something happen.”

Those kind of plays are why the Knights acquired Eichel.

It didn’t matter that he and a 2023 third-round pick cost them right wing Alex Tuch, prospect Peyton Krebs, the 16th selection in the 2022 draft and a 2023 second-round pick. There are only so many No. 1 centers in the NHL. Eichel is one.

It’s up to him to live up to that billing now. The Knights, after Eichel delivered the win against the Senators, went 0-5 in their next five games to fall out of the playoff picture. They never recovered.

Eichel wasn’t flawless during the stretch run, but he was also in a difficult position. His Feb. 16 debut with the Knights was his first competitive hockey game in more than 11 months after undergoing surgery to fix a herniated disk in his neck. He was in a new city, playing with new teammates and learning new systems.

“I’ve come in to a team in the middle of the season,” said captain Mark Stone, who was traded to the Knights in February 2018. “It’s not easy. Especially after getting traded, getting surgery, missing the next three months.”

Eichel’s transition became even tougher when he fractured his thumb March 17 against Florida. He didn’t miss a game. He had nine goals and 15 points in his final 19 appearances. The Knights went 10-5-4 and missed the playoffs for the first time.

“It wouldn’t have been surprising had he chose not to play with a broken thumb,” McCrimmon said. “I think he gained a lot of respect in his time here last season.”

The one thing the Knights’ early summer allowed Eichel to do was rest his body and mind.

The previous offseason was spent in limbo waiting for the end of his time in Buffalo. The Sabres drafted Eichel one spot behind Connor McDavid in 2015. They gave him an eight-year, $80 million contract in 2017. They named him captain a year later when he was only 21.

But the two sides could never find success. It was clear their relationship was headed for divorce when they disagreed over how to treat the neck injury he suffered late in the 2021 season. Eichel spent the summer hurt and waiting for a resolution. He didn’t get one until the trade in November.

None of those worries existed this year. He could prepare for the season with no restrictions.

“It was nice to be healthy and have a nice piece of mind,” Eichel said. “I knew where I would be come September.”

The more relaxed summer allowed Eichel to hit the ground running. He knows Las Vegas now and said it “feels more like home.” He has learned more about his teammates.

It already appears to have made a difference in training camp. Eichel scored three goals in his first two preseason games and added an assist. He made offense look easy.

There was one major change when Eichel returned to the Knights.

DeBoer had been fired and Bruce Cassidy hired. And he gave an honest evaluation of Eichel at his introductory news conference.

“He’s a guy that’s a high-end hockey player that’s still learning how to win and play the right way, so to speak,” Cassidy said.

Cassidy’s teams the past six years in Boston never missed the playoffs. Eichel’s in Buffalo never made the playoffs. Merging the latter’s offensive gifts with the former’s defensive structure could lead to success for both.

Cassidy’s scheme, which Stephenson said requires more movement from the centers, has a chance to play to Eichel’s strengths. He can get the puck already in motion and look to create transition chances, which he excels at.

“The system should favor my game,” Eichel said.

Eichel isn’t solely a one-dimensional player — the Knights allowed scoring chances at a lower rate with him on the ice at five-on-five compared to without — but his all-around game still has room to grow.

“Offensively, I’m not too worried about Jack,” Cassidy said. “He’s been very good in the league, and that comes real natural to him. (The) expectations are he’ll do his part to make us a good team and win.”

Eichel has goals for himself.

He won’t share them, but it would be a surprise if they were easy. He has come as far as he has by always pushing himself.

The only thing left is to achieve them. Eichel is being put in a position to succeed on a team hoping to contend again. He has the ability. He has the dedication. He has more talent around him than maybe ever before.

Golden Knights’ Phil Kessel looks to get career back on track