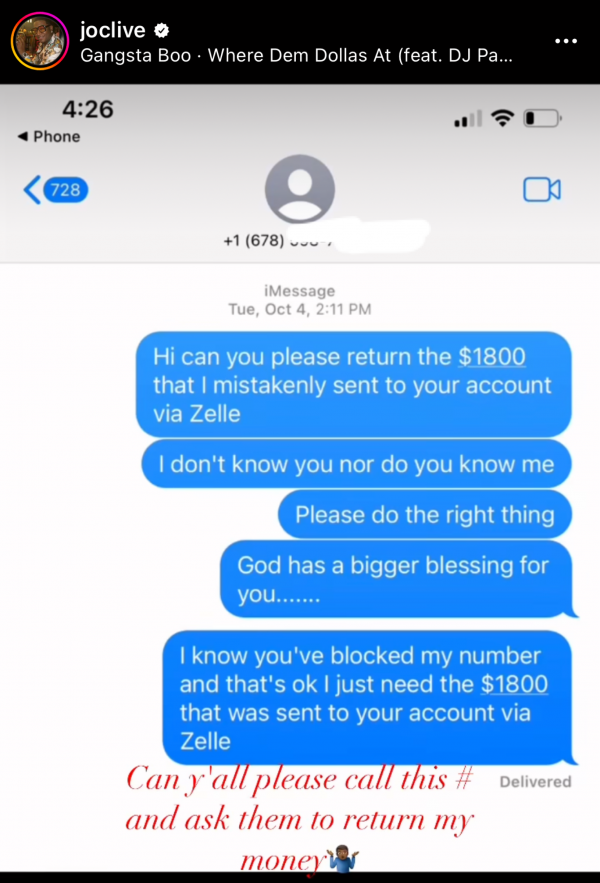 The Source |Yung Joc Accidentally Sends Money to Wrong Person, Asks Followers to help him get it back

Financial apps like Venmo, CashApp, and Zelle have made life easier for millions of people. However, they are still not foolproof from human error- a lesson that hip-hop artist Yung Joc learned the hard way earlier this week.

Joc reportedly sent $1800 to the wrong person on Zelle. He shared a screenshot on Instagram showing the series of messages in which he told the unknown recipient that he didn’t know him or her, nor did they know him. He said “God has a bigger blessing for you….”

The user reportedly blocked the “It’s Goin’ Down” rapper after the first two text messages. Seemingly frustrated, Joc appealed to his followers for help.

He captioned the conversation’s screenshot with the following: “So I sent them a Zelle by mistake and they won’t return my money…. can y’all please call/text them and ask them to return my lil change? 67859*****.” [We at The Source redacted the number.]

The appeal was met with mixed reactions by the artist’s followers with some saying that he can afford to take the L while others said that it was his money and he had the right to have it back. Other users pointed out the importance of doing a test send first to make sure that it went to the correct recipient.

While $1800 might not seem like a lot to most chart-topping artists and reality show stars, there have been rumors that Joc’s finances may be a bit shaky. In Gucci Mane’s song, “F*** the World,” a controversial line made reference to Yung Jog when Gucci rapped “I got all eyes on me like Pac did, but I ain’t tryin’ to go broke like Joc did.”