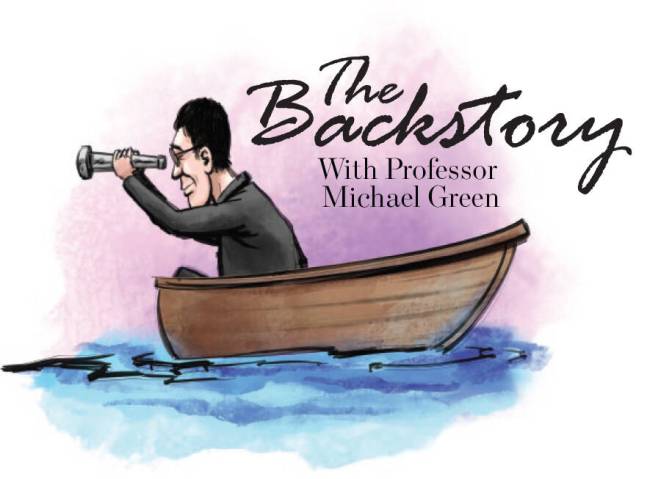 From Silent Season to Red-Hot Holidays

1. In 1905, the front page of the pre-Christmas issue of the Las Vegas Age discussed wooden water pipes and railroad issues. It was the first Christmas in the history of our city, and already economic and infrastructure development trumped holiday cheer. When you’re trying to build a city in the remote desert, history doesn’t let you take breaks.

2. In 1917, Christmas brought news of the death of Francis Newlands.A towering figure in Nevada history in ways both good and bad, Newlands had been in Congress for 25 years, the last 14 in the Senate. Newlands had a profound impact on Las Vegas that often goes unrecognized. His racial prejudice gets him more attention now: He wanted to repeal the Fifteenth Amendment because he opposed voting by people of color.

Newlands had come to Nevada to look after the affairs — financial and otherwise — of his father-in-law, William Sharon, the Comstock Lode’s leading banker. Newlands then won election to the House, focusing on a key issue: reclamation, or the idea of federally built dams, reservoirs and irrigation systems. The Newlands Reclamation Act became law in 1902, and the Bureau of Reclamation followed. The Fallon area soon benefited from diverting the Truckee River for agriculture. Alfalfa and cantaloupes became cash crops. Rural Nevada benefited greatly.

So did Las Vegas. The Bureau of Reclamation built smaller dams, then decided to build a big one on the Colorado River. Without that dam, and the Newlands Reclamation Act, Las Vegas would be a far different place. In the 1930s, tourists flocked to Las Vegas just to see the dam’s construction. That, in combination with the legalization of gambling in 1931, set the stage for things to come …

3. On December 26, 1946, the Flamingo Hotel opened.Hollywood publisher Billy Wilkerson and mobsters Benjamin Siegel and Meyer Lansky had seen opportunities for tourism on Highway 91, the route from Southern California that came to be known as the Las Vegas Strip. The Flamingo’s opening night drew a big crowd. As the Review-Journal reported the next day, visitors managed to “jam the joint until it appears the proprietors will have to disjoint the walls.” But the hotel wasn’t ready yet, so all those visitors left when it was bedtime. And before long, a winter quiet had descended over the the briefly raucous Flamingo.

4. For decades, the pre-Christmas period remained a sleepy time for Las Vegas tourism. It was a season for family visits, not neon escapism. But in 1982, Las Vegas Events was born, and in 1984, LVE hit the jackpot: Executive director Herb McDonald, a longtime local publicist and marketing executive, pushed to take the National Finals Rodeo from Oklahoma City. With financial help from Benny Binion, Las Vegas Events offered to more than double the prize money. The Professional Rodeo Cowboys Association voted — barely — to move.

The key for Las Vegas was that the NFR would be held in the traditionally quiet first half of December. Thanks to the rodeo, millions of new tourists have come to town. Hotels book country music acts who don’t usually perform there. Hundreds of millions of dollars have flowed into Las Vegas. The rodeo was quite the Christmas present to our economy. Who knew Santa’s reindeer were bucking broncos? ◆

Michael Green is a professor of history at UNLV.

Introduction to snowshoeing on Mount Charleston