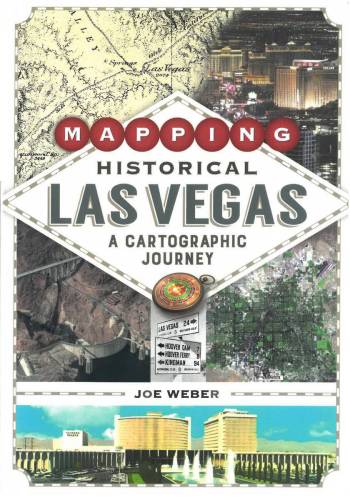 Revealing Las Vegas’ deep history, one map at a time.

On July 8, 1999, when I was 4 years old, the Valley was struck by a hundred-year flood. I still have shadowy distant memories of the other little kids discussing the rains in hushed tones. One girl said that the lightbulb hanging in her garage had gotten water inside it. I remember wondering all day how that could be possible.

My memory is dominated by scorching summer heat and the smell of dust in my nose, everything chalk dry except for seasonal springs up at Mount Charleston or Deer Creek in Red Rock Canyon. Save for these few examples of habitability at the edges of the Valley, and the Colorado River of course, I could see little reason why any group of people would have cause to live in this area. It was an ignorant and hasty thought, with scant consideration paid to the ancient residents of Southern Nevada, from the Anasazi of the Pueblo Grande near current-day Overton, to the Paiute who have and still make this valley home, to the evidence still presented by the Springs Preserve that this place once was more promising, hydrologically speaking, than it now seems to be.

In Mapping Historical Las Vegas, (University of Nevada Press, 2022), Joe Weber, a native Las Vegan who is now a professor of geography at the University of Alabama, examines the forces that have shaped the Las Vegas Valley — and water, as it must be, is at the heart of the discussion. Water is the key to the way we picture our past, portray our present, and propose our future here. In words, documents, and, yes, maps, Weber captures the connection between our waterways and aquifers and the subsequent historical developments they made possible: war industries associated with aviation and the atomic bomb, transportation, tourism, gaming, suburbanization. This book provides an extensive look into the city’s founding and growth and how the environment has shaped, and continues to shape, our lives.

Weber’s stated purpose in the introduction is to use mapping to provide crucial context overlooked in other books on the history of the Las Vegas Valley. In doing this, he happens upon not only what maps are meant to do — document elevation, roadways, waterways, residential areas, population growth, and the like — but also what maps mean. Think about what you are really looking at when you look at a map. A pictorial representation of a geographic space? That’s the simplest definition applied to any one of the maps Weber shares. But what is required of the imagination in drawing a map? You have the data: water courses, the location of retention basins, the science of the water cycle in the nearby Spring Mountain Range, measurements of land elevation and how that elevation has changed due to subsidence as residents have depleted the aquifer. Now, with all this at hand, you must represent it as accurately as possible, essentially re-envisioning reality in a form that helps us better understand the way things are, why they are that way, what could happen next, and even what we might do about it.

Readers of fantasy, of all things, understand the profound capacity of maps to define communities, explain histories and suggest alternative paths forward. Take Tolkien for example. At the front of The Lord of the Rings, you’ll find maps of Tolkien’s Middle-earth. If you go up to the northwestern corner of the main landmass, you’ll see a coastline that looks almost as if it has been fractured. To the devoted Tolkien fan, that one area has a deep significance in the battle between good and evil that has shaped and reshaped Middle-earth. At one point in the deep past, there was a land far to the north called Belariand. A great war was fought there against the first dark lord of Middle-earth, Morgoth. As a consequence of this terrible conflict, nearly the entire landmass, except for the easternmost sliver, split off from the main continent and sank into the sea. So the moral struggle between good and evil is conceived as the primary cause of change in the world of Middle-earth.

Though this isn’t scientific at all, it does capture the fundamental truth that underlies Weber’s book: While we know that geography shapes history, it is equally true that history — the fullness of humanity’s actions, choices, triumphs and mistakes — reshapes geography. The things we do are written in layers upon the land.

Sometimes a single major change — say, the construction of Hoover Dam — can account for shifting geographic reality, but the more we zoom into any one region, the more factors we see altering the state and shape of the land. Today’s policy dilemma’s may shape tomorrow’s maps: water-management at Lake Mead, the drought’s effect on power generation at Hoover Dam, the continued effect of urban growth on the Valley’s waterways. Human action has dried up a host of springs and washes while giving rise to others, such as the Las Vegas Wash, which was created by discharged effluent from sewage treatment facilities.

Weber invokes all of these factors, and more, as he uses maps to detail the history of his hometown. A map’s function goes beyond its initial purposes: to reproduce roads for the traveler, waterways and topography for the engineer, acreages and resources for policymakers and speculators. Maps shape our view of past and present — and of what our future might hold. Hoover Dam, Lake Mead, and Las Vegas itself, stand as monuments to the truth that the only constant is change. ◆

Desert ink, streaming: ‘I Love You But I’ve Chosen Darkness’ from page to screen