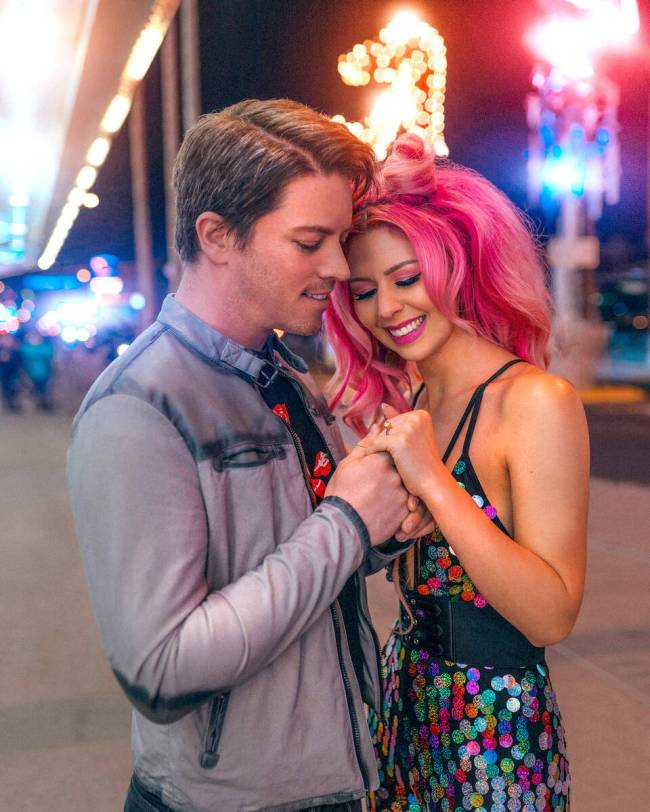 Annalee Belle was born in 1988 and grew up in Amarillo, Texas, the daughter of strict religious parents. Until seventh grade, she was homeschooled; in high school, she earned membership in the National Honor Society. Belle went to church several times a week and carried a Bible to school to share scriptures with classmates who might be interested. But secretly, she wanted to look like a “ ’hood Christian girl.”

By age 19, she was managing a Spencer’s retail store and waitressing part-time at a strip club to save money to move to Phoenix with her then-boyfriend. That move didn’t pan out: She says he had beaten her during their going-away party when she confronted him about his infidelity. Belle called the police and went back to waitressing at another strip club. To process the breakup, she set up a photoshoot, with no thought of it ever being more than a playful session. But another photographer saw the photos and wanted to photograph her nude.

The photographer, who said he shot for magazines such as Playboy and Maxim, told her about a casting website for professional models, makeup artists and photographers. Once she’d gotten started on the site, connections and gigs poured in. She traveled extensively around Texas, working for photographers as a model, and they booked her as a makeup artist as well. She also began working for a prominent makeup company, MAC Cosmetics. Meanwhile, the bar where she worked offered her $400 a night to take her shirt off, and she accepted. Still 19, she was bartending, waitressing, stripping, modeling and doing makeup. “Life kind of snowballed,” she says. “It gave me the freedom to travel and experience life the way I wanted to.”

Around 2012, a model Belle had done makeup for introduced her to an adult film company that sold to Europe. For three days, Belle filmed with an ex-boyfriend; she says she didn’t enjoy the process, and that it was the first and last time she starred in an adult film. She turned to performing burlesque, and even made her own costumes. In 2013, a photographer friend from Albuquerque invited her to Las Vegas to do hair and makeup on fitness competitors. By January 2014, Belle had settled here.

In March of that year, Belle’s roommates introduced her to J.D. Scott — older brother of Drew and Jonathan Scott, the creators of the hit HGTV show The Property Brothers — at Artifice Bar in downtown’s 18b Arts District. Scott continued the conversation online. One evening in July, he stopped by Belle’s photoshoot. Moments after he got there, the crotch area from the fishnet bodysuit Belle was wearing popped open.

Belle says that when she shot the adult film, she thought nobody in the U.S. would see it. After all, she’d been told it was for “the European market.” But the Internet rarely lets the past remain in the past, and illegal pirated copies of the film made their way across the Web.

In the fall of 2014, Scott posted casual — and fully clothed — snapshots of himself and Belle together. At the time, Belle says, the two were “dating but not in a relationship.” Some of Scott’s Twitter followers were outraged: What was he doing with this unwholesome woman?

“I was really afraid that it was going to negatively impact J.D.’s career,” she says. “He always reassured me that even if it did, he loved me, and it was a risk he was going to take. But I just couldn’t bear the weight.”

By the end of 2014, Belle says, she’d stopped posing nude. She spent an evening trying to take down all her nudes from Twitter, Instagram, Facebook, Tumblr, and wherever else she found them.

“I was so ashamed of what I had brought to J.D. and his family,” she says. “I couldn’t even tell J.D. how dark of a place my mind was in.”

Belle had no regrets or shame about her past work, but worried about the effects it might have had on others in her life. She kept modeling and did lingerie content, but by 2016 she had moved to beauty blogging because it felt safer, if less fulfilling.

The years that followed were increasingly painful for Belle. ”The cyberbullying took my mental health to the worst place it’s ever been,” she says. “I’ve never had any thoughts of self-harm until then, and it was extremely intense.”

She was particularly distressed when she learned that one of the cyberbullies was a friend. At the time, she and Scott were in the middle of pitching a show. With her mental state spiraling, Belle first turned to a counselor friend for assistance and then sought professional help. She also assembled an anti-cyberbullying team that monitored her social media accounts for bullying behaviors.

One of Belle’s friends, Melissa Black, co-owner of Bombshell Beauty Lounge Las Vegas on Fremont East District, supported Belle through the bullying. ”At the level she was being bullied most people’s spirits would have been crushed,” Black says. “Annalee Belle has a bright light inside her.”

After a major breakdown in 2018, Belle started speaking out online about mental health. With massive reach across her platforms — over 2.7 million followers on Facebook alone — she discusses both mental health in general and cyberbullying in particular. Followers often share deep and dark stuff with Belle, and she provides lengthy responses. Scott has also addressed the issue on social media.

Today, the couple lives in Las Vegas. Belle and Scott were featured on Property Brothers: Forever Home, Season 1, Episode 7, which originally aired on July 19, 2019. In the episode, Scott’s brothers transform his bachelor pad into J.D. and Belle’s “forever home.” J.D. is now the host of HGTV’s Brother vs. Brother, where the twins battle, flipping a home to see who commands the highest selling price. Scott and Belle have guested on other shows, but her primary role is as a makeup artist.

On October 31, 2019, Belle and Scott married at The Lotus House in Las Vegas. The daring couple asked guests to dress in Halloween attire. Scott’s twin brothers and groomsmen donned Mortal Kombat gear. The event even made its way into People Magazine. The marriage has flourished as Belle overcame the cyberbullying. “It’s better than ever,” she says.

“One of the most important connections for us,” Scott says, “is the ability to laugh with each other until it hurts.”

After the course-changes and setbacks, Belle is not yet where she wants to be in her career. She’s declined offers to be on reality TV shows. ”They wanted me to be more dramatic, more catty,” she says. “I’m not interested in being a fake version of myself on TV just to make money.” Belle recently contemplated returning to nude modeling; Scott says he’ll support whatever she decides. “I’ve never tried to limit Annalee in the direction she wants to take her work and career,” he says. “I stand behind the live and let live philosophy.”

Next year, Scott and Belle plan to make a road trip to small towns across America, doing photoshoots, events, and advocacy work where appropriate. Belle hopes to soon publish some tour dates on her website and social media.

“My number one goal with any form of advocacy is to help people express themselves,” Belle says. “When we feel free to be who we truly are, everything in our lives aligns much better — and we end up with more peace.” ◆

Revealing Las Vegas’ deep history, one map at a time.