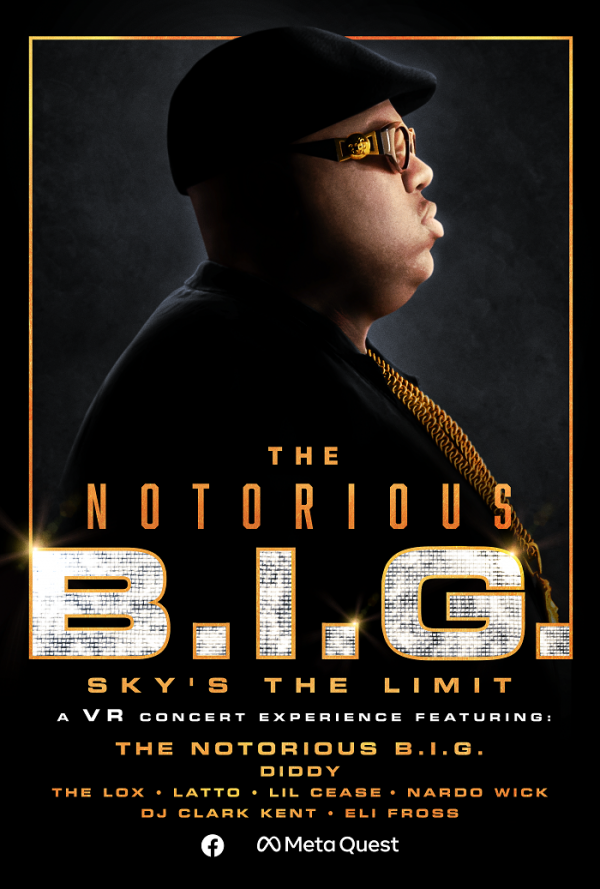 Meta to Host The Notorious B.I.G. VR Concert on Dec. 16

In a virtual replica of 1990s Brooklyn, the immersive VR event will feature performances by a hyper-realistic Biggie avatar accompanied by the avatar of longtime friend and partner Sean “Diddy” Combs (The Brook).

The Lox, Latto, Nardo Wick, Lil’ Cease, and DJ Clark Kent will all make special appearances in the narrative concert adventure, which was written and spoken by novelist and music journalist Touré. It will feature beloved Biggie songs from his discography as well as previously unheard material.

Ms. Voletta Wallace, Christopher Wallace’s mother, stated, “Having the ability to create a variance of new opportunity to showcase my son Christopher’s music through the advancement of technology is hard for me to grasp at times, however, I’ve found so much excitement in the process of developing his avatar, understanding the value added for fans to experience him in ways unattainable till now. Thank you to all who have contributed to bringing this project to fruition.”

“Biggie’s music has been streamed over 11 billion times worldwide and 6.5 billion in the US alone, but because of his untimely death there just wasn’t enough content to support the overwhelming demand for his music. This is why I originated the idea and came up with the decision to create a digital avatar,” says Elliot Osagie, founder of Willingie, who spearheaded the technology innovation development with VFX director Remington Scott, CEO of Hyperreal.

Biggie’s Manager, Mark Pitts, President of RCA Records, stated, “It’s amazing to create new content for BIG. The world was robbed of an opportunity to watch Biggie grow and evolve as an artist. The wonder of Web3 is that it gives us an opportunity to celebrate his music with visuals that Biggie never got to make.”

“Biggie’s untimely death, similar to that of Kurt Cobain and Tupac, was a seminal moment in my prior gig at MTV,” said Van Toffler, CEO, Gunpowder & Sky. “So, having the opportunity to be part of his rebirth in the virtual world – coupling the latest avatar & motion capture technologies with the best music & storytelling – is a dream come to life. Biggie’s impact on music & culture will never have an expiration date.”

You can watch the trailer for the show below.