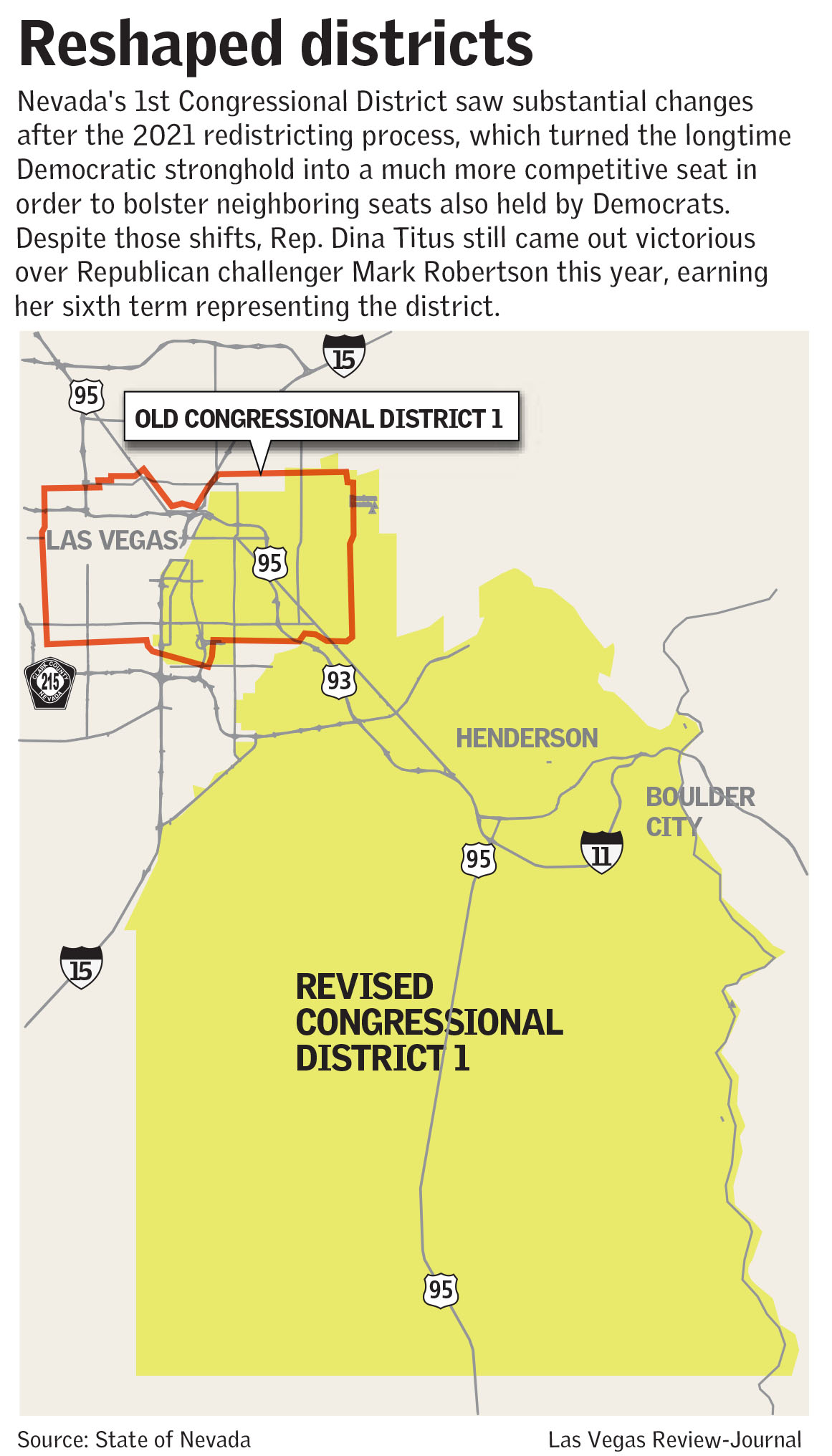 Nevada Democrats won under new maps, but will they in the future?

It didn’t take long for Nevada Democrats’ redistricting maneuvering to pay off.

A year after the Democrat-controlled Legislature redrew the state’s political boundaries, Democrats defended all three of the competitive congressional districts in Southern Nevada while also expanding their majorities in both chambers, including regaining a supermajority in the state Assembly.

And they did it in a year where Republicans won the Nevada’s governor’s race and were expected by pundits to make congressional and legislative gains in Nevada and across the country.

“It’s always a risk,” UNLV political science department chair David Damore said of the Democrats’ redrawing of boundaries. “But this is the Democrats using the levers of power that they have to give themselves the most opportunities to win moving forward.”

Nowhere was that risk more evident than in Nevada’s 1st Congressional District, which has been represented by Congresswoman Dina Titus since 2012.

In five elections from 2012 to 2020, the closest a Republican came to beating Titus in the district happened in 2014, when Dr. Annette Teijeiro lost to Titus by 19 percentage points.

But the Democrat-controlled Legislature last year redrew Nevada’s four congressional districts, carving up that once-entrenched Democratic stronghold in order to bolster the two other competitive districts where Democrats were playing defense.

The new maps moved several Democratic precincts from Congressional District 1 to Districts 3 and 4, making Titus’s election this year a much more competitive race in a year that was supposed to favor Republicans.

It was a decision that did not sit well with the dean of Nevada’s delegation in D.C.

“I totally got f—-ed by the Legislature on my district,” Titus said during a labor union town hall in December 2021. “I’m sorry to say it like that, but I don’t know any other way to say it.”

Titus had questioned the decision to create three competitive districts rather than creating two safe seats and one competitive swing district.

Over the course of the campaign, Titus’s seat looked like one of the most vulnerable in the nation. She was pitching herself to new voters in some Republican-leaning areas, and the partisan registration Democrats held in the previous iteration of the district’s boundaries shrank substantially. Some late-cycle polls showed her Republican opponent, Mark Robertson, up by as many as 10 percentage points.

But when the dust of the ballot counting settled last week, it was Titus who still cruised to a somewhat comfortable victory, defeating Robertson by 6 percentage points, 51.6 percent to 46 percent.

“I said I got f——ed, but I never said I wouldn’t win,” Titus told the Review-Journal last week.

Titus attributed her win, as well as the wins by Reps. Susie Lee and Steven Horsford in Districts 3 and 4, respectively, to Democrats having a better ground game and better message to voters than their Republican opponents this election.

Those efforts were aided by the U.S. Supreme Court’s decision to overturn Roe v. Wade this summer, which brought abortion rights to the forefront of the campaigns, Titus said.

But Titus said she’s worried about how the makeups of those districts will change over time given that they will continue to add more suburban voters as the Las Vegas Valley continues to expand.

“My fear is that it just looks like the districts, as they are drawn, will become increasingly difficult for Democrats,” Titus said.

Peter Koltak, a Democratic consultant who advised the state Senate Democratic Caucus during the redistricting process last year, said it is those suburban voters where Democrats are making inroads, specifically in Nevada.

At the legislative level, Democrats won the same number of Assembly seats this year as they did in 2018 to take a 28-14 seat supermajority. But the margins in many of those races shrunk, in some cases significantly, compared to 2018.

“If you’re drawing districts that are within the range of competitive margin, of course you’re taking a calculated risk that you might lose one or two,” Koltak said.

But Koltak said those risks were understood while drawing the new districts, both the congressional and legislative boundaries.

“The thinking was always that we were confident in our ability to win elections in the state. History has shown us over the past 15 years that Democrats are good at winning elections in Nevada,” he said.

Damore said the Democrats’ plan was not “egregious” gerrymandering even though there were definite shifts in favor of Democrats across the board.

The new districts aren’t unwinnable for Republicans, Damore said, and this election cycle in particular was one in which the GOP could have taken advantage of those districts where margins had narrowed given the economy and national political landscape that seemed stacked against Democrats.

“Republicans are going to have to figure out what kind of candidates to put forward,” Damore said.